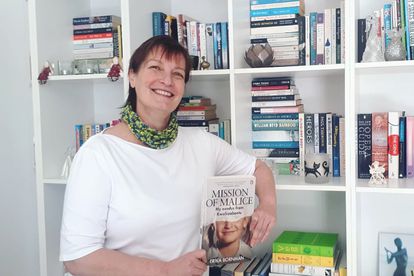 In August 2021, Erika Bornman took the South African book world by storm with the release of her tell-all memoir Mission of Malice: My Exodus from KwaSizabantu.

In her book, Bornman invites readers into the days of her childhood at the infamous mission as a young girl and eventually a young adult. Soon after Mission of Malice hit shelves, it quickly went on to become a bestseller across SA.

In late September, a month after her book was first released, The South African sat down with Bornman for an exclusive interview to talk about her experience of writing a book during lockdown, how she feels being seen as a hero for other victims of KwaSizabantu, and what the future holds for her.

I just wish to adequately paint the picture of my experiences and thereby hopefully uncover some keys to unlocking the door with which I keep the world at bay.

Erika Bornman in her book Mission of Malice.

ALSO READ: ‘Mission of Malice’: A story every South African should read

In the 1980s, Erika Bornman’s family joins, and ultimately moves to, KwaSizabantu, a Christian mission based in KwaZulu-Natal, which is touted as a nirvana, founded on egalitarian values. But something sinister lurks beneath “the place where people are helped”.

Life at KwaSizabantu is hard. Christianity is used to justify harsh punishments and congregants are forced to repent for their sins. Threats of physical violence ensure adherence to stringent rules. Parents are pitted against children. Friendships are discouraged. Isolated and alone, Erika grew up in constant fear of eternal damnation.

At 16, her grooming at the hands of a senior mission counsellor begins. For the next five years, KwaSizabantu wages emotional, psychological, and sexual warfare on her, until finally she manages to break free and escape at the age of 21.

She cannot ignore her knowledge of the grievous human rights abuses being committed at KwaSizabantu, and so she embarks on a quest to expose the atrocities.

Mission of Malice – My Exodus from KwaSizabantu chronicles Erika’s journey from a fearful young girl to a fierce activist, determined to do whatever it takes to save future generations and find personal redemption and self-acceptance.

ON WRITING HER MEMOIR DURING LOCKDOWN

When asked about her experience with writing and finishing her book in the middle of a global pandemic and during South Africa’s harsh lockdown, she says it had its up and downs. Some days were great and very productive while, on other days, she wanted to pull her hair out.

She says it was thanks to her two cats that she did not lose hope. Their presence was a great comfort and helped her through the darkest of the lockdown days.

Bornman also says that lockdown actually forced her to make new friends. Forced to stay in our homes, Bornman found a kindred spirit in her neighbour, something she states would never have happened if it wasn’t for lockdown.

Bornman opens up about her trauma and her guilt

One of the defining features of Bornman’s memoir is her raw honesty. Far from claiming to be perfect, Bornman is clear that while her experience was horrific, she is not blameless.

She states that she had to take accountability in more ways than one.

She had to reclaim her victimhood — “I am not a victim but a survivor” — and she also had to take responsibility for some of her actions while she was at KwaSizabantu.

In Mission of Malice, Bornman reaches out to the people that she had hurt as a result of being completely powerless to the ones in control who forced her to do what she did. She states that this was a crucial part of her writing down her story.

“I had to be honest with not just myself, but with the people I hurt because I was hurting”.

‘I HAD TO BE STRONGER THAN I FELT’

After Bornman’s memoir hit shelves in August of 2021, her story touched hearts across South Africa and it led to more and more victims who had similar experiences at KwaSizabantu, to come forward.

She became an example and leader for other victims who had been too scared to come forward, but who were encouraged by Bornman’s bravery and honesty.

By telling her story, Bornman was letting the world into her childhood, her abuse, her recovery and how she became who she is today, an experience she describes as “scary but freeing”.

But Bornman is adamant about not being seen as the perfect example for others to follow. Her honesty with not just herself, but the people she is reaching out to, is what drives her work. She is upfront about her flaws and how she wants to right her wrongs.

One of her goals for writing her story was to inspire other victims who, like her, had been scared to own their trauma and experience and emerge a survivor on the other side.

She states that she wants the world to know that escape is not the end of hurting, but it is the beginning of healing.

Bornman rejects any romanticising of escape. Her candidness about everything not immediately being magically better when you escape a bad situation and that the hard work only really begins afterwards, is what makes hers such a powerful story and voice.

BORNMAN ON THE FUTURE: ‘I HAVE SO MUCH STILL TO TELL’

When asked about any future writing plans, Bornman says that she is far from finished.

“My story is not finished because I am not finished; I am still healing…Who knows, there could be another book in me somewhere; I have so much still to tell.”

An avid reader herself, Bornman mentions that she is passionate about South African writers, especially female writers whose strength inspires her to keep writing and creating art through words.

Bornman mentions that in the future, she would love to try her hand at editing and that there are some exciting things in the pipeline.

Erika Bornman has made a name for herself in magazine publishing and, despite her lack of formal training, has written for various publications, including Fairlady, Hot! and Cosmopolitan. She has also edited several custom magazines, including titles for Mediclinic, Sun International and Old Mutual. She lives in Cape Town with her two cats.

Mission of Malice: My Exodus from KwaSizabantu is published by Penguin Books SA and is available at Exclusive Books for R257.