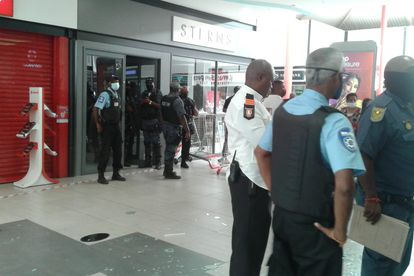 The KwaZulu-Natal SAPS Provincial Commissioner, Lieutenant General Nhlanhla Mkhwanazi has condemned the looting of two jewellery stores in Phoenix following an earlier robbery by a highly armed gang on Monday.

Videos of the Phoenix Plaza robbery were earlier circulated on social media. It was unclear at the time why people were seen in a video running into the shopping mall.

“Whilst we have launched a manhunt for the gang who initially robbed the jewellery stores we will spare no effort in ensuring that those bystanders that made themselves criminals by robbing both stores themselves, are also investigated fully for their actions,” Mkhwanazi said.

“Communities are once again warned that they become criminals when they help themselves to property at crime scenes. We will not tolerate such acts of criminality in the province and those that were responsible for the mayhem witnessed today will be brought to book,” he said.

SAPS spokesperson Jay Naicker said in a statement that a gang of heavily armed men had robbed two jewellery stores at the mall in Phoenix.

“The suspects fired shots in the air as they made their getaway and fortunately no person was injured. Phoenix police officers who were stationed in close proximity to the mall immediately responded and there was a shootout between the police officers and the suspects on the Phoenix Highway,” he said.

“The gang who were armed with high calibre firearms caused extensive damage to the police vehicle before fleeing with their loot. The police officers were able to escape unscathed during the attack. Police at Phoenix have assembled a team to hunt down the robbers,” he said.

He said that after the gang had fled, bystanders who witnessed the robbery, had then allegedly entered both stores and stole the remaining jewellery while threatening the highly traumatised staff.

“The investigation team will also pursue robbery charges against the culprits responsible for the crimes that were committed in the aftermath of the first robbery,” he said.