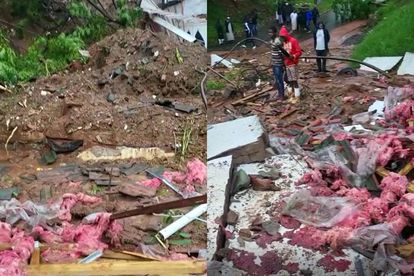 What started as warnings from the South African Weather Services escalated into intensified alert levels and for good reason. The KZN floods have destroyed roads, people are missing and loved ones have lost lives. Now, a mosque has collapsed raising fears for the life of the mosque’s muezzin who is believed to be trapped under the rubble. Residents in the area were in a frenzy to rescue the individual.

KZN FLOODS CASTS DOWN THE WALLS OF A DURBAN MOSQUE

The Banu Hashim Mosque in the Morningside suburb of Durban was reduced to rubble on Monday in the aftermath of the KZN floods leaving the community distraught.

The rubble-filled Lady Bruce Road property that once served as a holy place and safe haven for those to worship now looked like an excavation site.

Residents poured in to offer assistance as it was learned that one person may be trapped under the rubble.

A video was recorded of the devastation and it was revealed that the trapped individual was indeed the mosque’s muezzin – the person who makes the call for Muslims to pray at the mosque.

In the video, a person can be heard asking for heavy-duty construction equipment like either a Bobcat or TLB to remove the rubble.

“The muezzin may be stuck underneath, he’s not answering calls.”

said the individual in the video.

Rescue efforts are underway and warnings have been issued by the authorities of KZN.

eThekwini Municipality’s Disaster Management Department is in full force with its command nexus, from the emergency call centre to dispatched task teams and a command team to handle the aftermath of the KZN floods

However, the province’s Cooperative Governance and Traditional Affairs (COGTA) Department is urging residents to stay off the roads and help neighbours. The development was confirmed by COGTA spokesperson Senzelwe Mzila who said the provincial disaster management centre has called in for reinforcements from the SANDF…READ MORE