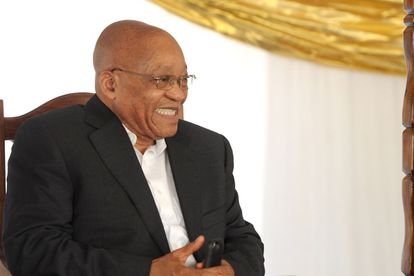 Zuma was visited by throngs of supporters who gathered to witness councillors gifting him with a bull. Image: GCIS/ Flickr

Zuma was visited by throngs of supporters who gathered to witness councillors gifting him with a bull. Image: GCIS/ Flickr

Former President Jacob Zuma is a master at delaying his legal proceedings. Delay after delay and appeal after special request, he has been doing it all for years. With the Pietermaritzburg High Court set to move on with Zuma’s trial on Monday, Msholozi has another trick up his sleeve. That trick was revealed by his spokesperson Mzwanele Manyi at a special press conference on Sunday.

After spending months trying to get NPA Prosecutor Billy Downer removed from his case, Zuma now intends to have Downer privately prosecuted. According to Zuma and his legal team, Downer leaked Zuma’s private medical records to journalists.

Speaking at Sunday’s press conference, Manyi claimed that the NPA has decided in the last week that it will not be prosecuting Downer. Manyi says that during the same week, Police took statements from journalist Karyn Maughan and an NPA prosecutor. Zuma opened a case against Downer last year.

“Zuma will remind the court that he has long anticipated that the NPA would refuse to prosecute one of their own even after his recent retirement. He therefore informed the court in his previous affidavits that he had instructed his legal team to institute Private Prosecution proceedings against Adv Downer with immediate effect subject to all the required administrative protocols as soon as the NPA announced its expected biased decision.”

Manyi has confirmed that Zuma will be present in court on Monday. The appearance will come just one day before Zuma turns 80 on the 12th of April. Last week, Zuma’s lawyers also wrote to NPA head Shamilah Batohi. He demanded that Downer be removed from the trial.

Zuma’s most recent delaying tactic was defeated after the Supreme Court of Appeal rejected his request to re-look at Downer’s involvement in the case.

Zuma’s trial sees him and French arms company Thales face charges of corruption and money laundering. The charges relate to an Arms Deal signed by South Africa in the 1990s.

The charges against Jacob Zuma were originally dropped by the NPA weeks before he was elected president in 2009. They were reinstated in 2018.

Zuma’s legal team is likely to ask for another delay on Monday, pending their push for private prosecution.