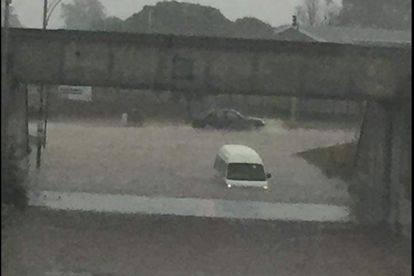 From the first snow of 2022, to more flooding across parts of Gauteng. The SA Weather Service has issued a disruptive rainfall warning for Sunday. They’re warning of dangerous conditions across Gauteng until late into the night. Localised flooding and poor driving conditions are expected. And that warning is already coming true. The first images of flooded areas are rolling in. At the same time, Emergency Services are sounding the alarm bells for other areas.

Overnight rain has continued throughout Sunday in most parts of Gauteng. Emergency services in the province are also issuing fresh warnings.

Johannesburg Emergency Services are now warning that several areas in Johannesburg are at high risk of flooding.

The JES has been on high alert since Saturday night and is particularly worried about those having to cross bridges and rivers.

“In Ivory Park a few weeks ago a number of shacks were swept away by floods. So far the water levels are ok. But the only challenge is most of these residents use the river streams to cross to go about their daily business. We have received a number of incidents where residents are trapped while trying to cross these rivers.”

The JES has also activated its Swift Water Rescue Unit for if and when it is needed over the coming days.

From rain to snow

A bit further out of Gauteng, the first snowfall in Southern Africa for the year has been confirmed.

Lesotho has been blessed with some beautiful snowfall. Even though some snow was also expected in Drakenberg, it seems those mountains have remained snow-free.

ALSO READ – The first 2022 snow is here! Lesotho wakes up to stunning snowfall

Pictures and video show that residents and visitors to the AfriSki lodge in the Lesotho mountains, woke up to some beautiful scenes. The snow in the area is also expected to continue to fall throughout the rest of the day.

Aside from the photos, there is also video of snow on the mountain pass. The footage was filmed on Sunday morning as some of the busses left the AfriSki resort in Lesotho. According to the latest report from the SA Weather Service, the Drakensberg might still manage to taste snowfall. Temperatures in the Drakensberg area are set to drop to -2C from 8PM on Sunday.