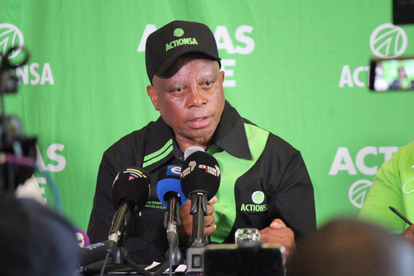 Herman Mashaba’s ActionSA has managed to emerge victorious after an error at the IEC was corrected. Image: ActionSA/ Twitter

Herman Mashaba’s ActionSA has managed to emerge victorious after an error at the IEC was corrected. Image: ActionSA/ Twitter

Former members of ActionSA in KwaZulu-Natal (KZN) say it was difficult to convince residents in the province to join the newly-formed political party due to Herman Mashaba’s lack of popularity.

Former members of the party’s PEC held a media briefing on Friday, 12 August 2022, in the wake of numerous resignations over the last two weeks. This prompted ActionSA to dissolve its leadership in KZN.

ActionSA’s outgoing secretary-general in KZN, Bongani Caluza said the dissolution was merely an attempt by the party’s top leadership to save face after all but three regional chairpersons had resigned.

According to Caluza, Faizel Cassim of the AmaJuba region, Nel Sewraj from iLembe and Elias Ntuli, who leads the Zululand region are the only ones left.

“Those individuals are friends of the president. So people must be clear, ActionSA has no direction. There is no ActionSA, this thing is a business of Herman Mashaba and his friends just to keep themselves busy,” he said.

Caluza adds that they have the trouble of convincing people to join ActionSA because Mashaba isn’t well known in the province.

“No one knows Mashaba here in KZN, if you’re recruiting, people are confused. ‘Who is Mashaba?’ You have to explain for 30 minutes. He has no followers so we are convincing people to join this organisation without knowing the leader because Mashaba is not popular enough.”

Mashaba has, however, blamed the resignations (at least in part) to “ANC tendencies”.

“If people come into an organisation from the ANC and want to bring ANC tendencies into our organisation, we don’t tolerate that. For us, we don’t have time to tolerate nonsense. We have a big project, and we will not allow people who are for sale and allow them to be bought and influence us,” Mashaba told News24.