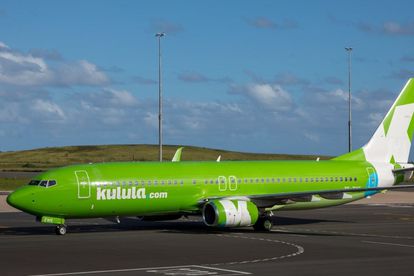 A Kulula plane sits on the tarmac before takeoff. Image: Kulula/Twitter

A Kulula plane sits on the tarmac before takeoff. Image: Kulula/Twitter

After initially suspending all Comair flights and its operating certificate for 24 hours, the South African Civil Aviation Authority has now made that suspension indefinite. This means that all Kulula and British Airways flights in and from South Africa have now been grounded. The decision has already affected hundreds of travellers and is now set to affect many more. The CAA says it all comes down to safety concerns that simply were not addressed by Comair.

On Saturday, the CAA suspended Comair’s operating certificate for 24 hours over a recent “spate of safety incidents”. The CAA has said that the issues relate to landing gear malfunctions.

In a statement from the Department of Transport,
government insisted that it had been advised that the suspension was done as a “precautionary measure”.

ALSO READ – ‘I want it to end’: Ramaphosa speaks on future of State of Disaster

In a new statement from the CAA on Sunday however, it reveals that despite engaging with Comair overnight, there are still certain areas it needs to look at.

“The Operator [Comair] started dispatching the evidence to the Regulator from the evening of
Saturday 12 March 2022. The inspectorate team worked through the night to review the evidence
received and as at 06:30am on the morning of 13 March 2022 the Regulator accepted the corrective
action and evidence submitted in respect of one Level 1 finding.”

“The review of the rest of the evidence of which the latest was received around 07:30
this morning, will continue to be assessed and reviewed by the inspectorate this morning.”

The CAA said in a statement on Sunday

The suspension of Comair’s operating license came after a CAA inspection of Comair. The inspection lead to three Level 1 findings against Comair and one Level 2 finding.

According to the CAA, a Level 1 finding is an “outcome that poses immediate risk” to safety and security.

When will Kulula and British Airways flights be back in the air?

The CAA says that it is now “fully committed” to making sure that Comair is back in the air. It’s dedicated a full team to assess and review all safety evidence as it gets submitted by the airlines.

While Comair has disputed the safety concerns raised, the CAA says it won’t lower its standards after SA having zero fatal airline accidents in over thirty years.

Before Sunday’s CAA statement, Comair had planned to resume its flight schedule by 12PM.