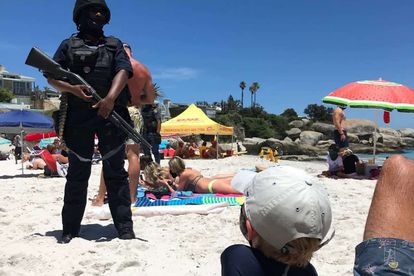 A picture can paint a thousand words, as the old saying goes. But this snap taken on Clifton 4th beach could become a national talking point for weeks to come. Several politicians, as well as a raft of concerned citizens, have lambasted the excessive show of force displayed during Bheki Cele’s visit to Cape Town.

The police minister is already facing a host of legal complaints about his impromptu appearance on the sands. But this viral picture has shocked and offended many. The image shows a heavily-armed police officer, bearing a pump-action shotgun and a magazine of bullets, standing just a few feet away from a young child.

The jarring photo was shared online by the mother of the youngster, who can be seen in the bottom-right of frame:

If you go down to the beach today*, you’re in for a big surprise… that’s my 5 year old, bottom right ?

‘Who does he intend to shoot?’

AfriForum, who are staunchly opposed to any beach closures in South Africa, also shared their two-cents. The lobby group was already enraged by the new restrictions – and the increased presence of armed officers has piqued the attention of Ernst Roets. Their head of policy was left dumbfounded, and questioned the intention behind the deployment.

Who does he intend to shoot and for what reason? pic.twitter.com/hhhuz33Lsm

It was also claimed that the shotgun-wielding officer actually represents a private security firm. This, however, has been dismissed – and the armed guard can be seen wearing national police regalia.

Either way, his presence was fully rejected by the ANC Western Cape’s Faiez Jacobs, who compared the chaos seen on Clifton 4th to the infamous ‘sheep slaughter’ witnessed on these sands during the 2018 Christmas holidays.