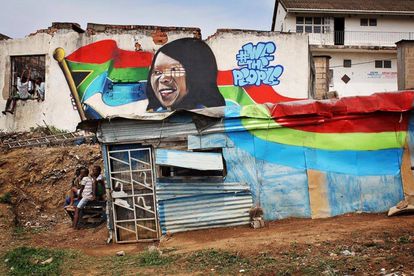 Our award-winning Public Protector Thuli Madonsela has recently come under fire from the ANC and their alliance partners for taking on Jacob Zuma on his Nkandla homestead. Her scathing report on the misappropriation and misuse of public funds by the main man himself has led key ANC members to publicly attack her office. This, however, has not deterred the embattled public protector, who has proved to be one of the lat bastions of transparent governance from pursuing justice on the public’s behalf.

These attacks on Madonsela have led to a partnership between Together SA and Thunderclap, who have initiated #WeThePeople — an online march in support of Madonsela. The movement is based on the idea that there are thousands of South Africans worldwide who want to unite with one voice to protect our hard won democracy.

The Together SA team, along with renowned street artist Gasak, chose the township of Inanda — where Nelson Mandela made the very first democratic vote in SA 20 years ago — to paint a mural of Madonsela. With the support of Desmond Tutu and Lulu Dube (daugher of John Dube, the very first leader of the ANC), Gasak started his three meter high artwork in honour of Madonsela’s work.

Unfortunately, there will always be those who will do anything they can to derail anti-ANC work. The next morning, a group of people had destroyed the artwork, and Gasak had received threats of violence against him for painting a mural of Madonsela.

Those who want to show their support for the Public Protector can do so by joining the #WeThePeople Online March. Support their Thunderclap campaign through Twitter, Facebook and/or Tumblr. On the 18th of November, social media will be flooded with a single message – “We support our Public Protector”.