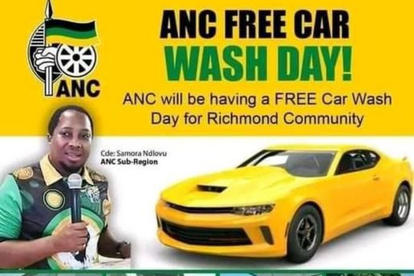 The ANC has been shamed as Mzansi lashed out at the party’s looming free car wash event in Richmond, KwaZulu Natal this coming Friday 22 October. The offer includes a promise to pay for the laundry of a few lucky winners.

The ANC’s Richmond comrade Samora Ndlovu expected excitement after headlining the party’s offer to clean community vehicles – but Mzansi wasn’t impressed at all.

The event was announced on social media this week before an immediate backlash left question marks on whether the gig will actually continue as planned.

“ANC free car wash day! ANC will be having a FREE Car Wash Day for Richmond Community,” the poster said.

Next to the announcement was a prominent image of Ndlovu as well as a luxury car with a bright yellow colour that matches the party’s image.

“Ukhongolose [Zulu colloquial term for the ANC] invites you all to bring for cars for free washing!” the announcement added.

“10 laundry baskets will be selected randomly and will be PAID by the ANC,” said a message in smaller text at the end of the announcement.

There are no social media messages without immediate reactions from the public, especially if you’re an under fire political party. One of the most popular reactions came from an apparent EFF supporter.

The person claimed that Juju’s party is only eight years old but has already created pilots, while the ANC is washing cars after more than a century of existence.

One hilarious response came from @ali_naka, who said: “Be careful guys, those guys are capable of stealing. Remove anything from your car.”

Here are some of the comments that caught the eye on Facebook: