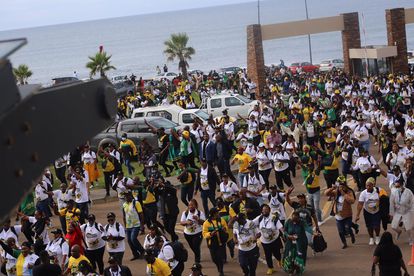 The Eastern Cape is one of the few remaining ANC strongholds in the country. While many parts of the province crumble and go without basic service delivery, the party still manages to have a tight grip on the electoral side of things. Over the course of this weekend, the ANC Eastern Cape Provincial Conference will elect a new leader for the party in the province. And with the ANC National Elective Conference set to take place later this year, whatever happens this weekend could be big for Cyril Ramaphosa’s future.

The battle for the chairmanship of the Eastern Cape ANC is between current chair and Eastern Cape Premier Oscar Mabuyane, and Babalo Madikizela. Madikizela was long seen as a Mabuyane ally before he switched allegiances over the last year.

Mabuyane is a close supporter of party president Cyril Ramaphosa, while Madikizela is part of the so-called Radical Economic Transformation faction. The group is set to potentially put forward a challenger to Ramaphosa at the national conference in December.

As has become standard practice for the ANC, members could not reach an agreement over which branches can be given the all-clear to participate. Despite several postponements to the conference to address issues over the last few weeks, a late court challenge was filed on Saturday.

The ANC Rubusana Region has approached the East London High Court looking for the conference to be interdicted. It all relates to a new disagreement over branch participation.

ANC NEC member Gwede Mantashe delivered the opening remarks of the conference. While making his comments, he went after DA leader John Steenhuisen and Eskom board member Busi Mavuso. Mantashe accused both of criticising the ANC purely for attention.

He also went after his own party, though. Mantashe explained that the ANC showed big losses in the 2021 municipal elections, because of “arrogance”.

“We must remember that society does not owe us anything. We owe that society quality of services that we promised. These last elections we did very badly. It’s not because people hate the ANC. But it’s because we are not connecting with society.”

Who will lead the ANC Eastern Cape after this weekend? A Ramaphosa ally? Or a man who has convicted criminal Andile Lungisa in his corner?