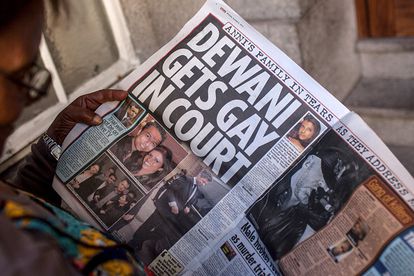 As one landmark trial reaches its conclusion, with the sentencing of Oscar Pistorius expected to occur within a matter of days, another trial brings South Africa and her hang-ups on normative male behaviour once again into the spotlight, and turns the attention of international news teams back to SA courtrooms.

British businessman Shrien Dewani, charged with killing his wife Anni in 2010, began to face his trial in Cape Town this week, where he revealed candid details about his personal life and sexuality in court. In a bid to win sympathies with his sincerity in court, Dewani laid all facets of the relationship with his wife as well as his conflicted sexual history bare, immediately making headlines around the world.

Thus, on the very first day of the trial, the public and the press met a rather different Shrien Dewani, taking on the role of a victim to his own inner conflicts and identity problems — and not that of a premeditated murderer. This, at least, seems to be the image that Dewani seems to be keen on creating going forward, with a host of further revelations still expected to be produced, as the court dives deeper into Dewani’s past sexual exploits.

Chief among his revelations, Dewani admitted to being bisexual, having had various sexual encounters and relationships with men before in his life (including contact with male prostitutes, with whom he allegedly used play out numerous fetishist fantasies). He also volunteered details about his suffering from a hormonal imbalance, which led him to opt for testosterone replacement therapy several years ago.

Thus within the first day of court hearings, Dewani’s widespread image of an ambitious, young male possibly capable of murder had changed in the public eye to that of a troubled soul with no clear sense of identity or direction – let alone having the makings of a ruthless killer.

The prosecution is rumoured to have planned to reveal Dewani’s personal life in court but Shrien Dewani beat them to it, and not without reason it would seem: instead of looking like a vicious sexual predator as the prosecution may have intended, Shrien Dewani is now beginning to create his own image on the back of their designs, empowering his legal team to try everything to turn the tide in his favour. Shrien Dewani’s lawyer Francois van Zyl read out Dewani’s plea explanation in court, which highlighted and extrapolated on several of these surprising admissions, and set the scene for Dewani’s defence:

Dewani remained predictably and adamantly defensive of his innocence, pleading not guilty to all five of the charges brought against him. Both his family and the victim Anni Dewani’s family were present in court, as they heard all details of Shrien Dewani’s sordid revelations as part of his plea. But regardless of the polarising views on the British Indian businessman, gasps were reserved that day for images shown in court of Anni Dewani’s lifeless body at the alleged murder scene, leaving Shrien Dewani’s apparent efforts to try to attract further attention as the victim of a social system supposedly built against him at best half-finished.

These highly charged moments were somewhat reminiscent of the courtroom drama witnessed in Pretoria several months ago, when pictures of Reeva Steenkamp’s head injuries were presented in court (and broadcast live around the globe) in the Oscar Pistorius trial. But while parallels between the two cases continue to surface now and again, the attention paid to Dewani’s trial had hitherto not managed to attract anywhere near the same amount of news coverage as in the case of the bladerunner.

The two cases and the fascination they have been attracting might highlight South Africa’s uneasy relationship with the concept of ‘normal’ male behaviour and the country’s culture of patriarchy, whereby machismo attributes tend to be valued across various social groups while a strict notion of patriarchy is often enforced often even at the price of violence. The background to the charges in both these celebrity cases may serve to underline this cultural undercurrent, as does the escalating rate of violence against all women.

With Dewani’s multiple admissions in court to these instances of less-than-normative male attributes in the make-up of his persona, it is unclear whether the tide may turn against him (as someone who is perceived not to be “man enough”) or whether his popularity will triumph in the end, with him taking on the role of an underdog. Public opinion had been stacked against him so far, both in the UK and in South Africa, but Dewani may well be trying to change that with the proverbial best policy of all: honesty. Or at least trying to look honest.

The seeds for this approach, however, would appear to have been planted long ago. Shrien Dewani had been extradited to South Africa only earlier this year, following a lengthy delay on account of legal evaluation processes in the UK, which included generous amounts of time spent inside a mental health facility near Bristol. It is alleged that while there, he survived various suicide attempts and suffered from depression as well as post-traumatic stress. However, all these factoids might only add to the emerging picture of an unstable person unfit to be found guilty of murder, kidnapping, robbery with aggravating circumstances, conspiracy to commit murder and attempts to defeat the ends of justice.

“As a consequence of the traumatic experience which resulted in the loss of my wife, I have been hospitalised for over three years and suffered from post-traumatic stress disorder. This, and the resultant flashbacks, nightmares and anxiety attacks, have affected my memory and impacted on my ability to precisely and chronologically recall events concerning the terrible incident,” Dewani explained in his own words at the onset of the trial, almost asking to be implicitly forgiven for his projected lack of stability – mental or otherwise.

What followed in court then were merely minutiae pertaining to the night of Anni Dewani’s death according to Shrien Dewani’s own account. Whether he was telling the truth or not, Dewani’s image had already forever changed following the long list of intimate admissions.

But newspaper front-pages around the globe were quick to react not to Dewani’s account of that fateful night but to his unexpected admissions to gay sex and missing hormones, judging the man well before a verdict in court might be due by the end of the year. And with pressure growing to bring this dragging court case to a final conclusion, the standard recipe of using machismo behaviour as the benchmark of all things in SA is unlikely to pay off, as making Shrien Dewani look weak might in itself defeat the ends of justice. Newspapers and broadcasters might not get the scandalous story of a calculated murderer after all, while they seem to conspire to push the image of a man not fit enough to be man.

Dewani has always maintained his innocence, claiming that he and his wife Anni became victims in a botched hijacking while travelling on a minibus taxi through townships in Cape Town’s Gugulethu on their surprise honeymoon to South Africa. This trial seeks to establish what really happened that night, but with or without his admission of guilt, lacking hormones or sexcapades, Shrien Dewani deserves a fair hearing without the trial-by-media kind of sensationalism, for which South Africa is beginning to garner quite a reputation. However, what the public may not realise is that Shrien Dewani and his team are also trying to use that reputation to their advantage, creating a lose-lose situation in which justice itself is at stake. Following the widespread disappointment at the outcome of the Pistorius verdict, can SA afford to perpetuate this image?

Three Capetonian men, Zola Tongo, Mziwamadoda Qwabe and Xolile Mngeni, have already stood trial for Anni Dewani’s murder and were subsequently found guilty as co-conspirators in the case. They all allege that Shrien Dewani had ordered the killing, paying them R15,000 for the deed. Yet none of them received anywhere near the same amount of media attention despite the victim being the same person. Perhaps their lawyers should also have brought forward gay partners and endocrinology reports in their own defences, as Shrien Dewani still prepares to face lovers old and new in court.