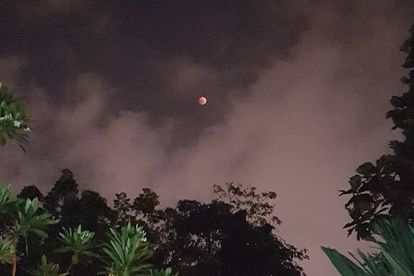 South Africans are among those who are in for a rare event on Friday, 27 July 2018: a total blood-red eclipse.

What time is the lunar eclipse on Friday, 27 July

The longest total lunar eclipse to occur in the 21st century will be visible from South Africa from 19:15 on Friday evening, with the totality phase happening around 21:30.

Where can I see the lunar eclipse?

South Africans will be lucky enough to be able to view the lunar eclipse. Major cities like Cape Town and Johannesburg, and other parts of South Africa, are organising viewing points where people can come and enjoy this cosmic display.

Will we always experience a total lunar eclipse?

With the moon inching 4 centimetres away from the Earth every year, we will not always be entitled to total lunar eclipses. But that’s only in billions of years from now.

For now, the moon is at an ideal distance for Earth’s shadow to cover it entirely and just barely.

Eclipses have bewildered and terrified people throughout history. Blood-red eclipses, where a total lunar eclipse would make the moon appear a shade of red or copper, would cause a frenzy due to a lack of understanding. The occurrence would often be attributed to a deity.

In order for any lunar eclipse to occur, there needs to be a full moon. With this in mind, these are the three types of lunar eclipses:

Unless you are a keen skywatcher, this type of lunar eclipse is easy to miss.

Even though a total lunar eclipse transitions through a partial phase on its way in and out of totality, some eclipses are only partial.

This occurs when the sun, Earth and moon are not perfectly aligned. How they are lined up directly affects what people on Earth see.

When the sun, the Earth and the moon are in perfect alignment, we are entitled to a total lunar eclipse.

The Earth’s umbral shadow is entirely cast on the moon during the totality phase. This doesn’t mean that the moon will completely disappear.

⠀ Super Blue Blood Moon from a few months ago! ? – Did you experience this extraordinary celestial event? – Photo by: @richinframes Always #wondermore

A post shared by WONDERLUST COLLECTIVE (@wonderlustcollective) on May 29, 2018 at 9:24pm PDT

To give more perspective: if we were looking at the Earth, from the moon, during this alignment, we would see the Earth blocking the sun.

It would appear as a black disk with a ring of light around the edges. It is that light that is scattered and refracted by Earth’s atmosphere.