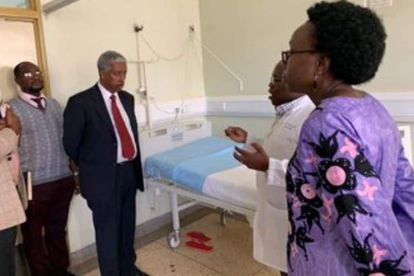 Uganda’s health minister Jane Aceng, in purple, during an inspection of one of the country’s designated COVID-19 isolation facilities on Friday. Photo: Twitter/@JaneRuth_Aceng

Uganda’s health minister Jane Aceng, in purple, during an inspection of one of the country’s designated COVID-19 isolation facilities on Friday. Photo: Twitter/@JaneRuth_Aceng

Uganda’s health minister on Friday stressed that the country had no confirmed cases of the novel coronavirus (COVID-19).

Jane Aceng made the statement while updating the public on Uganda’s preparedness to prevent the virus from reaching its shores.

“To date 695 travellers, Chinese, Ugandans and others travelling back home have been isolated for purposes of follow-up. Of these, 488 are Chinese nationals, 64 other nationals, while 143 are Ugandan citizens. Two-hundred-and-eighty individuals have completed 14 days of self-isolation,” she said.

The minister said there were several precautions citizens could take to reduce their chances of being infected.

“Wash your hands frequently with soap and water, or use an alcohol-based hand rub. And please cover your mouth and nose with tissue or a handkerchief when coughing and sneezing.”

Used tissues should immediately be disposed of in dustbins or incinerated, she said.

Citizens should also keep a “reasonable distance” between themselves and those who were coughing and sneezing. Aceng suggested one metre.

She said an inspection of the Entebbe RHH hospital on Friday morning – one of the country’s designation isolation facilities, had revealed that it was “well prepared” and “adequately equipped” to handle cased of COVID-19, should there be any.

Aceng said that 11 ambulances had been placed on standby to transport suspected cases of infection to the designated isolation facilities.

The virus was first detected in China’s Wuhan city in December last year. It was declared a public health emergency of international concern by the World Health Organisation (WHO) on January 30.

Latest figures from the WHO indicate that 82 000 cases of COVID-19 have been recorded globally. The virus has thus far claimed 2 800 lives, the vast majority of these in China.