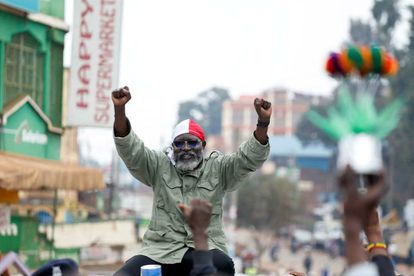 George Wajackoyah is a presidential candidate in the upcoming Kenyan elections, to be held on August 9.

Marijuana and hyena testicles are amongst some of his unconventional solutions to Kenya’s socioeconomic problems, reports TimesLive.

Wajackoyah is the leader of the Roots Party and his campaign for the presidency has sparked much public discussion. This can be attributed to the unusual promises of his campaign.

A big part of his campaign is the promise to regulate marijuana production in the country. He believes marijuana exportation could be a very powerful economic force.

Wajackoyah thinks this would solve unemployment and high national debt in Kenya. He also claims it could bring in over $76 billion into the Kenyan economy, reports BBC.

This follows the trend of African countries looking to enter the growing marijuana market such as South Africa and Zambia.

“Western countries have legalised bhang [marijuana]; why shouldn’t we?” he once said.

Apart from cannabis, Wajackoyah’s campaign has highlighted the economic benefits of the hyena testicle trade.

He says Kenya should sell the testicles to China since they are considered a delicacy there. In his other animal-related policy, he believes extracting snake venom could become a resource more valuable than gold.

What his campaign means for Kenya

Wajackoyah’s critics accuse him of running a populist campaign to garner attention. His party currently ranks third, polling with only 4% of votes according to The Standard.

Though this seems low, many believe he is doing very well for a first-time candidate. Additionally, his campaign seems to have captured the imagination of Kenyan youth.

This is an important demographic since youth voter registration is at an all-time low in the country. Though Wajckoya’s messaging is dubious to say the least, it is clearly an indicator that the Kenyan population is discontent with the state of their politics.

It is evident that his supporters are seeking someone who stands beyond the institutions that have historically disappointed them.