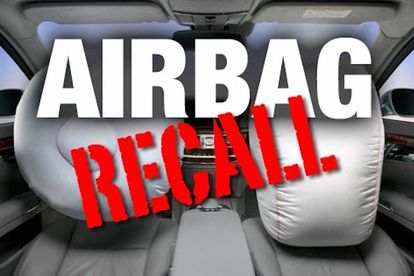 The Road Traffic Management Corporation (RTMC) has issued an alert that almost one million vehicles in South Africa will have to be recalled for inspection as a “precautionary measure” because of faulty airbags that could harm or even kill vehicle occupants.

This is as a result of the cars being fitted with potentially faulty Takata airbag inflators between 2002 and 2015.

The RTMC sent out the following communication via SMS:

“Your vehicle has been identified as being part of a safety recall campaign. You will be contacted by the manufacturer who will provide you with an appointment to visit their service centre. Please ensure that you engage in this critical safety matter as directed.”

National Association of Automobile Manufacturers of South Africa (Naamsa) CEO Michael Mabasa said 936 000 vehicles manufactured in 2015 were affected in South Africa, with 377 000 already having being tested.

He said from the 49 different car brands in South Africa, only 10 were being recalled.

Mabasa said “this was precautionary and not mandated,” the Centurion Rekord reported.

However, he added that “we need to inspect these vehicles in case the airbags explodes.”

RTMC will track down affected motorists

Mabasa said the RTMC would assist Naamsa with the recall as their database only had information of new car buyers from dealerships.

“Since 2015, many people have replaced those particular vehicles and these vehicles are now in the hands of second-hand owners. The RTMC will ensure that through their data, we can track the current owners of these vehicles.”

“We urge those who have bought vehicles through 2002 and 2015 to contact their dealerships so we can be able to test and replace their airbags at no cost.”

Use VIN number to check with manufacturer

RTMC spokesperson Simon Zwane vehicle owners could log in to the website of the manufacturer of the vehicle and check by entering the VIN number if their car had to be inspected.

“To prevent theft, owners are advised to deal directly with vehicle manufacturers and should take vehicles to the dealership for inspection. Owners should under no circumstances hand keys to people who may claim to have been sent to collect the vehicles.”

About 100 million cars with Takata inflators have been recalled worldwide.