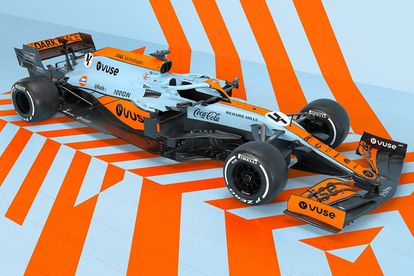 The timeless orange and blue makes a return to motorsport. Image: McLaren

The timeless orange and blue makes a return to motorsport. Image: McLaren

Motorsport die-hards all know that a racecar isn’t all about function over form. There’s another factor; what the car looks like. Over the last century there have been many colourways that have captured the imagination of motorsport’s audience. And this weekend a real legend returns to the F1 grid that most of us haven’t seen in a few years; Gulf Oil.

In 2020, McLaren and Gulf announced a beginning of a partnership for the foreseeable future. The oil giant will back the British team’s efforts to once again become a front-runner in motorsport’s upper echelon. The next step is a one-off design for the MCL35M  racecars of Lando Norris and Daniel Ricciardo, their race suits, the team kit, and on their social media platforms. Read

It’s all about style, you see

“This will be McLaren’s homage to Gulf’s celebrated race car design. We’re enormous fans of brave and bold design, and the striking Gulf blue is among the most loved liveries in racing, a celebrated piece of culture which transcends the world of motorsport.”

“Gulf and McLaren have a relationship that dates back to 1968 and is one of the most successful partnerships in motorsport. We are incredibly excited to pay tribute to this heritage with our classic livery design at the Monaco Grand Prix, the most spectacular and stylish event on the Formula 1 calendar.”

Grab your Gulf gear while you can

You can also be a part of the historic campaign by owning some McLaren Racing merchandise also themed in the blue and orange of Gulf. Apparently, we’ll only see the cars in this livery at the Monaco GP, and the clothing and apparel line will have a limited run on the McLaren store.

The Monaco Grand Prix will be run on Sunday, 23 May.