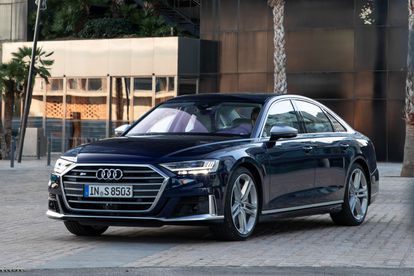 The range-topping model of the A8 range is the Audi S8 model, which features all the niceties of the standard models in the range, some model-specific trim, a twin-turbocharged V8, and of course, quattro all-wheel drive.

Supplementing the powerplant’s output is a mild hybrid system (MHEV), that runs on a permanent basis to reduce consumption and minimise carbon emissions. Audi’s also thrown in a cylinder-on-demand system that effectively switches off specific cylinders during low throttle conditions.  Impressively, there’s also a high-performance alternator with an additional lithium-ion battery that allows for coasting with the engine off.

While the new Audi S8 might have a reduced carbon footprint, what does it bring to the party to compete with its German rivals in the form of BMW’s M5 and the Mercedes-Benz E63 AMG? The answer is Volkswagen AG’s twin-turbocharged 4.0-litre V8, and in the S8 it packs a mighty 420 kW and a mammoth 800 N.m of torque.

The quattro all-wheel drive allows for a zero to 100 km/h sprint of just 3.8 seconds, and the Audi S8 can manage an electronically limited top speed of 250 km/h, as per the age-old German manufacturer gentleman’s agreement.

The S8 also wouldn’t be an Audi if it didn’t push the boundaries of physics through its advanced road-holding technology. Torque is sent to all four corners, but that’s just part of the equation. The S8 turns in sharper by way of all-wheel steering, which uses a steering angle on the rear axle to supplement the front wheels, and there’s a sport differential that decides which rear wheel to distribute power to depending on load.

There’s also what Audi calls predictive active suspension, which uses electromechanical actuators at each wheel to tell the air suspension to inflate or deflate. Basically, the movement of the Audi S8’s body is reduced during rapid acceleration, hard cornering, and sudden braking.

Typical of the brand, there’s plenty of contrasting trim on the outside, which on the Audi S8 is finished in a brushed aluminium look. You can, however, have these details stand out less by opting for the black styling package, which darkens the grille, side mirrors, and exhaust tailpipes. An extended version of the pack also allows you to darken the four Audi rings front and rear, as well as the badges.

Befitting a vehicle of the S8’s status as the range-topping Audi sedan, the interior is swathed in the finest leather available to Audi craftsmen – Valcona. The driver and front passenger are perched in Audi Sport seats, which feature powered adjustment, side bolsters that adjust to provide lateral support, three-stage heating function, and optional massage settings.

The long list of standard equipment in the Audi S8 will make technophiles blush. The company’s MMI infotainment system can now be controlled almost entirely through two large displays that dominate the dashboard, through touch sensitivity or voice demands. The screen behind the steering wheel is also home to Audi’s virtual cockpit system and displays vital driving information like the speedometer, tachometer, and navigation in digital format.

Those who want to stay connected at all times are able to use the smartphone interface to link their mobile device to the MMI system through Android Auto and Apple CarPlay. The audio plays through a  Bang & Olufsen sound system.