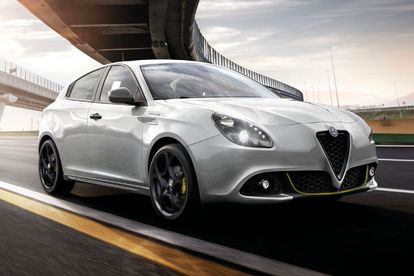 After a decade-long production run, the current 940-series Alfa Romeo Giulietta will be laid to rest as the Italian manufacturer axes the model. But it’s going out in style with a limited-run model dubbed the Edizione Finale.

According to Australian motoring magazine Wheels, the Giulietta’s swansong will be cut short for that market at just 35 examples. The exclusivity will be highlighted with model-specific paint finishes (Alfa white, anodized blue, and magnesium grey matte) as well as contrasting yellow accents on the brake calipers and lower sections of the front and rear bumpers.

The finish on the grille, side mirrors, and side skirts mimic a carbon-fibre weave to add some sporting pretence. The raw carbon effect is continued in the dark finish of the Edizione Finale’s 18-inch alloys and rear diffuser-style panel.

The cabin in the Edizione Finale befits its status as the last model to bear the Giulietta nameplate. There’s faux-carbon trim all over, and the yellow detailing outside continues with yellow stitching on the leather steering wheel, floor mats, and gear lever boot. Alfa Romeo’s also left nothing in the options column, as the Giulietta Edizione Finale features a sunroof and electrically adjustable and heated front seats.

You don’t need to be a die-hard Alfisti to be able to predict that the company’s go-to performance engine in this range, the 1.75-litre turbo-petrol four-cylinder with its 177 kW and 340 N.m outputs, was the choice candidate under the bonnet.

Like the other models in the Giulietta range, the Edizione Finale is driven by the front wheels through a six-speed dual-clutch transmission and a limited-slip differential. Its dynamics are enhanced by Brembo brake calipers, Pirelli tyres, and adaptive dampers on the suspension system.

The 1750 motor will sound a little different in Edizione Finale guise, however, as it’s been fitted with a sports exhaust system by Italian powertrain specialist Magneti Marelli.

The Edizione Finale celebrates the true Italian flair the Giulietta is renowned for, with sporty special edition updates that will make this a unique collector’s item for Alfa Romeo enthusiasts or those searching for a distinctive rare vehicle

For now, just 35 lucky Australians will get to purchase one of the Edizione Finale Giulietta models, as it’s unconfirmed whether we’ll see a few of these on South African roads.