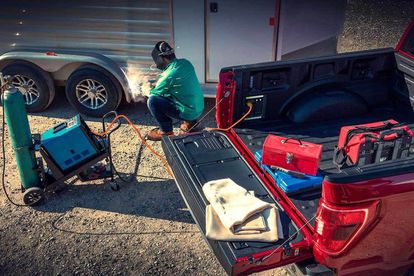 With Eskom’s latest announcement that it would implementing Stage 2 load shedding from Thursday right through until Sunday, South Africans are again scrambling to secure alternative sources to keep the lights on.

That’s essentially four consecutive days of power cuts, and adding insult to injury, according to Eskom the “system remains vulnerable and unpredictable” and should any further breakdowns occur, the stage of “load shedding may change at short notice.”

Across the Atlantic in the US, as if in tune with South Africans power-outage frustrations, a US-based motoring journalist has offered another power source alternative, after successfully testing how the Ford-F150 Hybrid bakkie can power your whole house.

You can use the F-150’s generator as your personal electric utility in two ways, wrote journalist Ezra Dyer on Car and Driver.

In the most elegant scenario, you’d run a cable from the 30-amp, 240-volt outlet in the bed to a 30-amp transfer switch and directly power selected circuits in your house.

“No extension cords, no breaking out your World’s Greatest Dad table lamp to light your kitchen counter. I do not have a transfer switch. So, extension cords it is.”

The PowerBoost drivetrain is cool on its own but, says Dyer, the onboard generator is the intriguing option.

“And that latter number is enough to run your whole damn house. I know because I have a 7.4-kilowatt solar array and a net electric meter that tells me whether I’m using grid power or pushing electricity back out.”

Dyer explains that there are four regular 120-volt outlets below the 30-amp plug, and each pair of these is a 20-amp circuit rated for 2400 watts. (There are 120-volt outlets in the interior, too.)

“That’s a lot of power. To safely make the most of it, you need thick extension cords. Which, fortunately, I have. The main one I use in outages is rated for 1875 watts. I have others in various lengths and gauges to construct my own messy indoor power grid. I powered up the truck, plugged in my cords and got to work.”

Let there be light…

To test the F-150, Dyer says he plugged in as many things as I could think of, all at once: coffee maker, Shark vac, TV, internet modem and router, tankless gas hot water heater, fridge, garage fridge, a couple of lamps, and his1400-watt iron.

“I don’t normally vacuum, make coffee, and iron clothes all at once, but these are the things we do for science,” Dyer quips,

“The F-150 ran everything simultaneously and could have handled more. I know this because the generator display on the 12-inch dash screen shows exactly how much power you’re demanding at any given moment. My various gadgets devoured 3200 watts, which is way beyond the draw that would have caused my Honda to blow its circuit breaker.”

This is more than half of the power available to 120-volts, but less than half of the system capacity if I were running my house off the 240-volt feed. In fact, the truck seemed bored with this assignment. Occasionally, the V-6 would shut down and leave the truck’s 1.5-kWh lithium battery to run the show, resulting in the quietest 7.2-kW generator you’ll ever hear.

There’s a muted whirr from beneath the truck, and that’s it.

Why wouldn’t you just buy a 7200-watt generator?

The F-150 generator is a deal, Dyer says, and you don’t have to lug it around, find a place for it in your garage, or worry about the fuel going stale.

“It’s just there, in the truck, whenever you need it.”