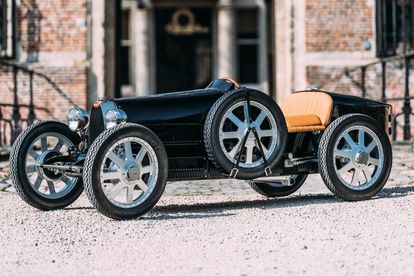 In mid-2020, we confirmed that the design and testing phase of the Bugatti Baby II three-quarter scale car had been completed and that the bespoke item aimed at the young-at-heart with enough spare cash lying around would soon be on its way to owners.

First announced at the 2019 Geneva Motor Show as a celebration of the legendary French brand’s 110th birthday, the Bugatti Baby II is a joint effort with Little Car Company. The British manufacturer of exclusive playthings committed to building just 500 to ensure that it remains elusive.

The first Baby II models sent to Dubai and Belgium

One of the cars was sent to a long-time Bugatti vehicle owner in Dubai who owns a private jet terminal. The carbon-fibre bodied Vitesse specification Baby II, finished in an eye-catching custom shade of orange called Jetex, was also kitted out with the touring pack. This includes a pair of LED headlamps, fenders, and mudguards.

In Vitesse guise, it runs off a 2.8 kWh battery pack and upgraded powertrain. This version also features the famous Bugatti Speed Key, which unlocks an additional 6 kW over the Base model’s 4kW and de-restricts the speed limiter.

The other Baby II is the range-topping Pur Sang specification, which has the same powertrain as the Vitesse, but with hand-crafted aluminum bodywork. The Nocturne Black exterior hue has been colour-matched to the Belgian owner’s original Type 35 A – the racing car on which the Baby II is based.

There are three versions of the Bugatti Baby II; Base, Vitesse, and Pur Sang. The asking prices start between R500 000 and one million Rand, but because everything can be customised you’ll probably end up paying much more than that anyway. Bear in mind that this is before shipping and import duties.

The Little Car Company is not resting on its laurels just yet, and is already planning another three-quarter scale model. With a planned run of 1 059 units, the Aston Martin DB5 Junior will be a little less exclusive, but no less coveted.