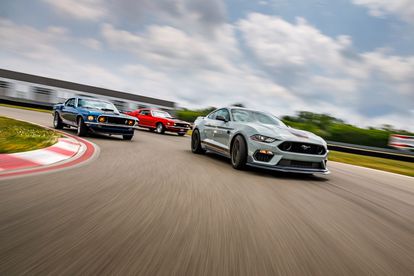 The Ford Mustang Mach 1 continues where its predecessors left off. Image: supplied.

The Ford Mustang Mach 1 continues where its predecessors left off. Image: supplied.

Ford originally introduced the Mach 1 as a special package for the fastback version of its Mustang muscle car. Now the Blue Oval brand has revived the iconic name as a limited-edition version of the current Mustang.

The Mustang Mach 1 is distinguished from the 5.0-litre GT model through its unique appearance, more powerful V8 engine, and model-specific interior. Ford South Africa has confirmed that only 90 units have been designated for the local market.

Watch: The Mustang Mach 1 put through its paces

Pony up in the Mustang Mach 1

Under the bonnet lies the same tweaked version of the 5.0-litre V8 that debuted in the Mustang Bullitt, which produces 338 kW and 529 N.m of torque. Customers can choose to put those outputs to tarmac through the six-speed manual gearbox developed for the Mustang Shelby GT350, or via the company’s 10-speed automatic transmission.

To prepare the Mach 1 for track time, Ford fitted it with an adaptive suspension system, enhanced the electric power steering, and added stiffer sway bars and front springs. The rear subframe is host to stiffer bushes and components borrowed from the Shelby GT500 Mustang.

It looks the part too

All Mustang Mach 1 models will be finished in a distinct shade of grey that Ford calls Fighter Jet, and other visual elements that make it stand out include a matte black bonnet and stripes with orange detail. There’s a boot spoiler at the rear that Ford claims generates 22% more downforce than the Mustang GT. There are also model-specific 19-inch alloy wheels made to look like the classic wheels on the original version.

Inside, the orange detailing is also found on the seats and there are Mach 1 scuff plates on the door sills. As an added treat for owners, there’s also a badge on the instrument panel engraved with the chassis number.

“Like the 1969 original, the Mustang Mach 1 bridges the gap between the standard Mustang GT and the high-performance Shelby models, delivering V8 power, unique functional aerodynamic enhancements, competition-capable suspension upgrades and a driver-focused cockpit.”