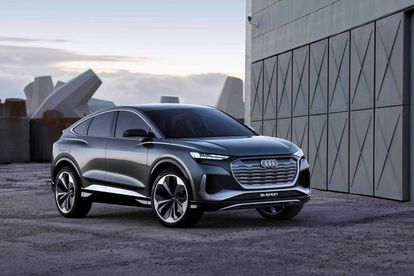 No stranger to the electric drive for battery-powered mobility, Audi continues to unveil electric cars faster than any of its direct premium-segment competitors. This new Q4 Sportback e-tron is the latest concept vehicle from the brand, and it won’t be a concept for much longer.

Audi AG board chairman Markus Deusmanm presented the car at a digital press event, a marker for what he terms a “young, progressive and powerful” product portfolio going forward. Despite the devastating effects of the COVID-19 pandemic, Audi is now in a “recovery phase”, a process of getting back up to speed on production and business goals.

The Audi Q4 Sportback e-tron concept is part of this plan, launched a touch later than initially anticipated, it’s been revealed and presents the Audi design philosophy and DNA in the metal.

Audi AG head of design Marc Lichte presented the design tenets of the latest electric Audi SUV. It certainly strikes a chord with its fastback coupé design that finishes at a stylish rear spoiler that complements and splits the rear into two distinct pieces.

The taillight cluster runs the length of the boot, a la other members in the family but its more digital in its link to the larger light assembly on either side. With short overhangs and sporty, bulges at each wheel, Marc points out these are there as a depiction of Audi’s famed Quattro system and brand.

At the front, Audi’s single-frame grille is not finished in black as you’d expect perhaps from its current range, yet a black contrasting surround detail envelopes the grey grille each side of which is the signature Audi lighting system with a unique slim-design DRL display, as well as lighting animation that Audi arguably does best.

It stands large and sporty, despite it being the same width and length (just about) as the Q4 e-tron SUV. It is the coming together of Audi’s key product cues: Q, Sportback and e-tron and as Audi launched it. “Electric. Cool. Sexy.” From the pictures. I certainly agree.

Being a BEV, the battery pack sits on the floor of the Modular Electrification Platform (MEB) platform. This is a VW group-use platform on which a number of electric models are built/will be built in the future.

A coupé with space

It is for this reason that Audi claims a much larger interior shell than is expected from a similarly sized ICE vehicle. Interior space is comparable to that of a higher class of vehicle, say a Q5 in this case. The absence of a transmission tunnel in the rear assists with this. So, coupé design with more space than expected?

The interior is less “concep”’ than you’d generally see from Audi. It’s another sign that Audi is serious about rapid production. Yes it’s a modern, digital experience similar in execution to that of the Q4 e-tron.

Its mix of light materials contrasted with darker flooring and carpeting make for a classy and uncluttered cabin architecture.

Each axle is powered by an electric motor, making the Q4 Sportback a quattro, albeit slightly different in its drivetrain deployment. Audi has named this a sporty SUV, so optimum traction is key and that is then all worked out by smart control system that delivers power in the best ratio depending on the driving scenario.

The car is set to use rear power more often for efficiency of use. Of course, when power is needed, the front motors do their work.

Combined output from the motors is 225kW, 150 of which is made up from the rear motors and the remaining 75kW comes from the front. Claimed mileage from the 82KWh batteries is 450km and 80% charge can be achieved in just over 30 minutes.

No 7 in Audi stable

Seeing Audi produce stunning electric cars is not entirely novel with this being the company’s seventh electric model. But the Q4 Sportback e-tron is indeed a continuation of that bold journey. It cuts a striking pose. Markus Deusmanm wants people to feel proud to be driving Audi cars, and if this one is anything to go by, that’s bound to be the case.

It’s still a concept right now, but it checks the boxes of an emotional, progressive and, of course, more sustainable product. With this car, and news of Audi unveiling the more powerful e-tron S models earlier in 2020, Audi is certainly making the electric car ever cooler. One year to go…