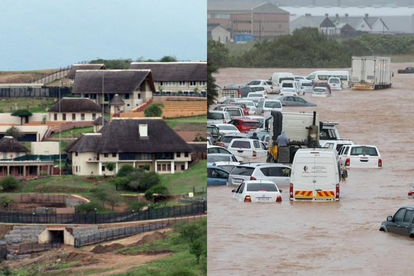 One woman thinks Zuma must be forced to accommodate KZN flood victims. Images via Twitter: @Lduga

One woman thinks Zuma must be forced to accommodate KZN flood victims. Images via Twitter: @Lduga

South Africans across the country have been left deeply concerned about the victims of the KwaZulu-Natal floods and have been putting their heads together to find a way to lend a helping hand. One woman took to Twitter to share her bright idea – accommodating flood victims at Jacob Zuma’s Nkandla homestead.

The post soon went viral as many people either thought it was a brilliant suggestion or bashed her for even bringing it up.

Over the last few weeks, hundreds of people lost their lives and thousands more lost all of their belongings – houses and cars included – to vicious floods and landslides caused by strong rainfall in KwaZulu-Natal.

Since then, South Africans across the country have been making donations and offering ideas to help those affected by the recent floods.

One Twitter user with the handle @Lduga asked on 16 April last week:

“Why are we not accommodating victims of #kznflood in this statehouse?” she also included a photo of former SA president Jacob Zuma’s controversial Nkandla homestead.

The post did not sit well with many Zuma supporters who called the woman foolish for suggesting flood victims be accommodated at Nkandla.

Other South Africans who insist that Zuma used taxpayers’ money to build the homestead, agreed with the Tweep that flood victims should be accommodated there.

“This is getting irritating now, or you guys just don’t wanna use your brains, 1stly this isn’t a statehouse, it belongs to bab Zuma n his family, 2ndly Durban and Inkandla are way apart from each other, 3rdly yekan ubab Zuma alone, he paid wat the state wanted him to pay msunu wakho.”

“The person who said to care about black people. 2 hours drive is nothing for people you care about. That one is not private property, it’s a national property built with taxpayers’ money.”

Who is Shivon Zilis? Five things to know about Elon Musk’s ‘baby mama’