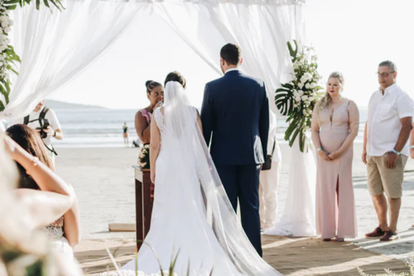 Thousands of internet users have been left absolutely shocked after hearing how an evil mother-in-law attempted to sabotage a bride on her special day. In a shocking TikTok post, a young wedding coordinator reveals how the woman planned on poisoning the bride but was luckily stopped in her tracks.

The lucky bride and the mother-in-law from hell

Mother-in-law’s with ill intentions have been around for ages. Many women have been subjected to the worst treatment from their partner’s mother who more often than not, has an unhealthy attachment to her son that he nurtured for a little too long.

In fact, according to Psychology Today, one in four daughters-in-law (DIL) despise their mother-in-law (MIL), finding her “controlling.”

A young bride nearly had her wedding day ruined by her mother-in-law who tried to intentionally feed the bride something that she knew the young woman was allergic to.

Taking to TikTok, a wedding planner named Callie (@_cal_cifer), shared how she became suspicious after the MIL in question went out of her way to have a special batch of cupcakes made for the wedding.

Her suspicions were proven valid when the groom had to quickly stopped his new bride who is allergic to coconut from munching down on a cupcake sprinkled with coconut that was handed to her by her mother-in-law who insisted she eats it.

“So at a wedding I worked, the future mother-in-law tried to give a cupcake covered in coconut to the bride who was severely, deathly allergic to coconut.”

According to Callie, the groom was not at all happy with his mother and wasted no time telling his mom where to get off. He allegedly started yelling about how terrible and unsupportive she has been throughout their relationship.

“You are a terrible person, you have never been supportive of this relationship, this is a new low even for you, you could have sent her to the hospital, she literally could have gone into anaphylactic shock, he literally just keeps going until the mother interrupts him to say that ‘accidents happen every year’.”

The groom obviously had no words left for his mother and asked her to leave, which she did…but not after lingering a bit.

Callie’s clip has since gone viral reaching nearly 1 million views and hundreds of thousands of comments from people who shared how shocked they were at this mother-in-law from hell.

ALSO READ: Didn’t RSVP? This bride may put you at the ‘shame table’…