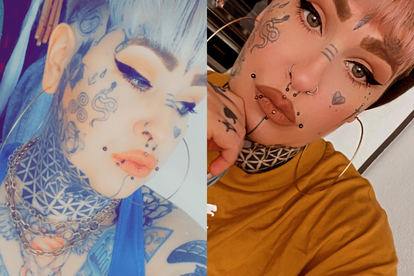 For some people, getting tattooed is a serious form of therapy and a nice way to show off their artistic sides – despite what South African Police Minister Bheki Cele thinks. For this woman, however, her tattoos – which are mostly on her face – are a way for her to hide the fact that she is quite shy.

According to her, her ink gives her confidence and makes her feel unique and different.

While some people can’t stand the sound or the feel of the tattoo gun on their skin – others absolutely love it and in fact, find it quite addictive.

German-born England-based Sabrina Dieck recently told The Mirror how she got her first tat in 2018 and hasn’t looked back ever since.

She now rocks 30 tattoos on her face and can’t even remember how much she has on her body. According to her, the tattoos make her feel beautiful and gave her the confidence she so desperately needs.

She also claimed that the tattoos have helped her overcome her shyness.

“Before them, I was shy. Now I feel so beautiful and different. I can’t even say how much they’ve helped.”

Will she be getting more?

Sabrina says that she is definitely getting more ink. In fact, she says that the only place she will not be putting a tattoo on is her eyeballs.

“I want to cover everywhere except my eyeballs. The tattoos have helped with my confidence.”

She also added that she is definitely addicted to getting tatted up.

“I must say it’s addictive. I now have no idea how many I have got.”

Most of her tattoos are of celebrities such as Drake, Will Smith, and Snoop Dogg.