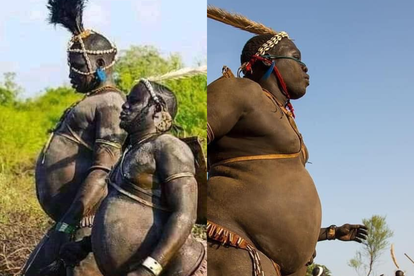 These Ethopian Bodi Tribe men come together yearly and compete to become the fattest in the tribe. Images via Facebook: @TheTribe

These Ethopian Bodi Tribe men come together yearly and compete to become the fattest in the tribe. Images via Facebook: @TheTribe

For many people, staying lean and mean is a true symbol of health and fitness. For men in the Ethiopian Bodi Tribe, however, being fat means being more attractive. And so every year a large group of men come together and spend six months drinking blood and milk while they compete to grow the largest and most protruding bellies.

While there is no prize at the end of all the weight gain – the biggest man becomes a hero for life among the rest of his tribe.

While many of us are working hard to get rid of that extra belly fat, the men from the Bodi Tribe are attending the Ka’el fattening camp to help them build the fattest bodies that they can.

According to the Facebook page, The Tribe, men from this Ethiopian tribe all gather for four to six months yearly for the sole purpose of gaining weight.

The page explains that the men are fed a gruesome mixture of cows milk and blood which fattens them up quickly because the bigger they are – the more attractive they become.

Young women help the men on their quest and bring the men the mixture to help fatten their guts. They also sing for them to keep them awake, bring them alcohol and wipe away their sweat.

The prize for all of this, The Tribe explains, is only adulation from their fellow tribesmen.

The post has gone viral and sparked thousands of comments from social media users who re flabbergasted.

“Culture is very interesting and unique but without changes in culture too… there’s no development. We can do better than this.”