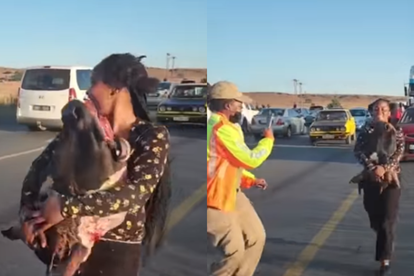 This woman has gone viral after looting a cow head. Images via Facebook: SA Truckers

This woman has gone viral after looting a cow head. Images via Facebook: SA Truckers

Another day, another viral video in South Africa. This time a woman has gone viral and earned herself a new title after she became one of many locals who decided to help themselves to huge cow heads that came off a truck that had been transporting the meat on the N4.

Cow head thief gets ‘looter of the year’ title

Here in South Africa, one must be prepared to see just about anything.

A young woman has made it to the top of viral video trends after she was recorded looting a large cow head.

In a clip that has been shared thousands of times online and also by SA Truckers on 9 May, the woman is seen running from a truck while holding the huge and heavy severed head.

What’s even more shocking about the video is the fact that a traffic officer can be seen running beside her and instead of stopping the woman, she is laughing as she records the bizarre incident on her phone.

According to radio 702, a truck transporting cow heads was traveling on the N4 when it was involved in an accident.

People driving by took advantage of the situation and started looting the truck. Also according to the publication, no one involved in the accident was hurt.

Mzansi is not impressed

While many found the video funny and joked about the woman’s amazing strength, others slammed her for looting the truck.

“Disgraceful, sad, lawlessness and stealing is a new norm in SA.”

“Unbelievable, she should be charged for defeating the ends of justice or Theft”

The cop also gets bashed

The traffic cop also received her fair share of criticism from locals who slammed her for recording as opposed to arresting the woman.

“Should be ashamed. Traffic officer making video and laughing. What a joke this country has become. Truly truly sad,” wrote Ronald Ronald.