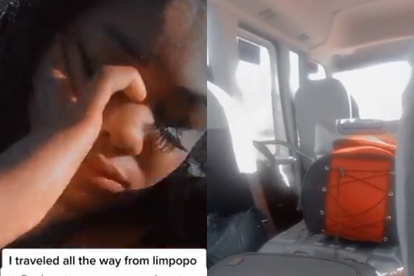 This woman travelled from Limpopo to Durban to meet a man she met on Tinder. Image via Twitter @alphamale4D

This woman travelled from Limpopo to Durban to meet a man she met on Tinder. Image via Twitter @alphamale4D

A young woman has been left absolutely heartbroken after she took a chance on love and it ended up blowing up in her face. Taking to TikTok, the young lady explained how she met the man of her dreams on Tinder and it was decided that she leave her home in Limpopo to meet up with her online love. Unfortunately, things didn’t work out after the man ended up ghosting her before they could even meet.

Her post has gone viral as social media users discuss online romance and the dangers thereof.

Meeting a potential partner on a dating site can be very exciting – but it’s also scary.

This is because one doesn’t know what to expect when it comes to someone you’ve met online, especially since people tend to paint the best picture of themselves instead of being honest about their shortcomings.

Despite this, one woman took a chance and trusted a man she met on the popular dating app Tinder.

Taking to TikTok, the young lady shared a video of herself on a bus from Limpopo to Durban looking very distraught.

In the caption, she explained that she is on her way to meet a man who decided to block her number after hearing that she was travelling to see him.

Watch the sad video which was reshared on Twitter by a user with the handle @alphamale4D below:

Many social media users have shared their sympathy with the young lady especially because she used her own money to make the trip.

“Her first mistake was using her own money to go see the gent (return transport money and accommodation) and allowing herself to go instead of the guy going to her. Ladies don’t please.”

ALSO READ: Groom DUMPS partner at the altar after his mom calls her an ‘ugly bride’