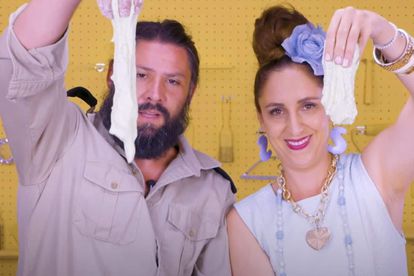 S is for slime! That’s right…after SuzelleDIY shared her tips and tricks for making your own reusable disinfectant wipes, South Africa’s favourite DIY expert went on to demonstrate how to make three types of slime. Yes, SuzelleDIY is back with another DIY web episode for her new ‘Suzellphabet’ series.

This time Ryno joins Suzelle in the studio to make the three types of slime. Ryno, who is Marianne’s boyfriend (Suzelle’s Bff), previously demonstrated how you can make a simple, yet stunning-looking organisation station with Suzelle.

“Did somebody say DI-SLIME? Watch me and Ryno to find out how to make three different types of slime: chia slime, fluffy slime and sago galaxy slime. Check out the recipes below and maybe you’ll also love making the slime just like Ryno did – it really was the best day of his life. Shame. Like Ryno says, ‘not all that glitters is gold, sometimes it’s slime!'”

See all the recipes in detail over here:

‘SUZELLPHABET’, A FUN-FILLED, CREATIVE DIY EPISODE FOR EACH LETTER OF THE ALPHABET

After sharing her best Easter hacks and a ‘how to’ video on making your own face mask, SuzelleDIY is still going at it with her ‘Suzellphabet’ series.

Fans of Suzelle have a total of 26 episodes to look forward to. Some of Suzelle’s favourite episodes include I is for Iron Hacks (who knew you could make toasted cheese using a clothing iron?) “Oh gosh! You are in for some big surprises and creative projects of your heart’s desire,” Suzelle said when introducing the project for the first time. From making various times out of jeans to making your very own foot-operated hand sanitizer station by using everyday things, Suzelle is still going at it with her series. And luckily, it’s not over yet! There are still 7 episodes left – and we wonder what DIY project SuzelleDIY has in store next?