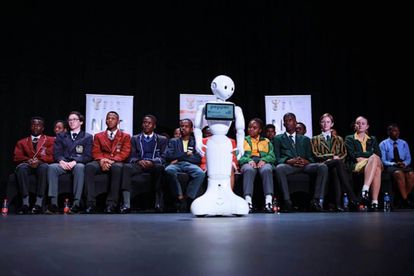 Motshekga announced the matric results of the 2019 National Senior Certificate on Tuesday 7 January – with the help of none other than Pepper the Robot.

Pepper stood on stage during the procession, addressed the audience and helped Motshekga to deliver the matric results. Pepper even got a hug from the minister at the end of her address.

According to its maker, SoftBank Robotics, Pepper is the world’s first social humanoid robot able to recognise faces and basic human emotions.

Pepper was optimised for human interaction and is able to engage with people through conversation and his touch screen.

Pepper is available for use in businesses and schools. More than 2 000 companies around the world have adopted Pepper as an assistant to welcome, inform and guide visitors in an innovative way.

Effects of the 4IR

4IR, otherwise known as the Fourth Industrial Revolution, is characterised by a fusion of technologies blurring the lines between the physical, digital and biological spheres, collectively referred to as cyber-physical systems.

According to salesforce.com, it’s also a fusion of advances in artificial intelligence (AI), robotics, the Internet of Things (IoT), 3D printing, genetic engineering, quantum computing, and other technologies.

It’s the collective force behind many products and services that are fast becoming indispensable to modern life. Think GPS systems that suggest the fastest route to a destination, voice-activated virtual assistants such as Apple’s Siri, personalised Netflix recommendations, and Facebook’s ability to recognise your face and tag you in a friend’s photo.

As a result of this perfect storm of technologies, 4IR is paving the way for transformative changes in the way we live and radically disrupting almost every business sector. It’s all happening at an unprecedented, whirlwind pace.

As these technologies change what’s possible, they’re also transforming customers’ expectations. A global survey from Salesforce Research shows that a majority of those surveyed, believe that these technologies — and the experiences they enable — will transform their interactions with companies within five years.

Most reactions to Pepper the Robot were ones of dismay. When the Department of Basic Education tweeted an image of the robot up on stage with matrics at the formal announcement on Tuesday 7 January, Twitter users said it was ironic.

“The irony that most matrics getting results with help from Pepper the Robot won’t be prepared to compete with it for a job,” said one user.

Another concern was load shedding which has recently made a dark return in South Africa.

With Eskom releasing a statement saying they would take into consideration the announcement of matric results in terms of load shedding, the Tweeps were up in arms.

“Mam Angie Motshekga sounds nervous announcing the #MatricResults2019 and I’m not sure if it’s because of Pepper the Robot or #loadshedding accommodating the results,” said a user.

“We need a robot president like Pepper that will be programmed and deliver as requested by the citizens. As a country, we are tired of being let down by people* who keep on being shocked whenever we go to load shedding,” added another user.