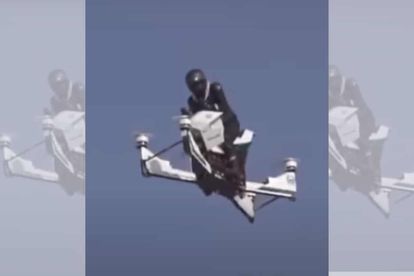 In the video, a driver from the Dubai police can be seen falling to the ground after the hoverbike from the Moscow-based company Hoversurf “pitches wildly back and forth like a mechanical bull in the sky”.

Hoversurf confirmed the crash on YouTube, saying: “The barometer in Dubai refused and an accident occurred – down from a height of 30 meters. All safety systems worked well, and the pilot was not injured. Safety is our main concern. It is thanks to such incidents that our designs are becoming more safe.”

Now, those interested in the eVTOL (Electric Vertical Takeoff and Landing) industry can watch the full crash from two different camera angles:

Hoversurf’s main goal is to solve the problem of the “ever-growing urban population” and its growing demand for transportation. “The only real solution is for humankind to move to the sky,” the company states on their official website.

It was previously reported that the Dubai police started training on the hoverbikes in order to “help first responder units reach areas that would otherwise be difficult to reach”. Apparently, Hoversurf is also developing a number of other eVTOL vehicles, including a “drone taxi”, which they claim can fly a distance of 300 km at 250 km/h for just over an hour.