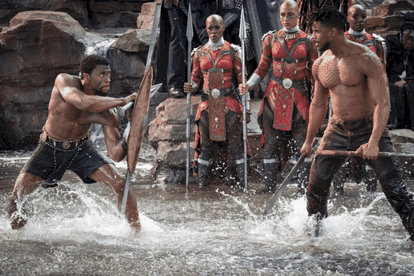 It’s not unheard of for authors or screenwriters to create a fictional language. Think of Star Trek’s Klingon, The Lord of The Rings’ Quenya, or Game of Thrones’ Dothraki.

With Black Panther’s release earlier this year, many Marvel fans were scratching their heads at Wakandan, the language spoken in the blockbuster film. Well, actually, it’s isiXhosa.

How did isiXhosa make it to Wakanda?

The decision to include isiXhosa in the second highest grossing movie of the year is all thanks to actor John Kani. He portrays T’Challa’s father in Avengers: Civil War. Kani said in at a press junket:

“We had this scene where I had to do a conversation with my son. I was supposed to say to him, ‘I miss you, my son, I haven’t seen you in a very long time.’ So I asked the directors, ‘Why am I speaking English? He’s my son we’re from Wakanda.’ And the directors asked, ‘What would you say?’ I said ‘Unqabile nyana, ndikugqibele kudala.’ My biggest surprise was that Chadwick responded [in IsiXhosa], ‘Ndiyaxolisa baba.’ I asked, ‘Where did you learn that?’ He said, ‘When I was in Cape Town, I worked with a South African crew.'”

Kani is a South African actor born in Eastern Cape. He received Life Time award from SAFTA in 2010 and had roles in Sarafina, The Ghost and the Darkness, and Endgame.

“One of the hardest languages on the planet.”

According to Lupita Nyong’o, who portrays Nakia, isiXhosa is not the easiest language to learn, adding that “the clicks are no joke.”

Nyong’o said in an interview that she would have been lost if it wasn’t for Kani and his son Athandwa teaching her and other cast members the basics. The actors had to watch a lot of videos and pay attention to the accent and pronunciation of words. She explained:

She loves the fact that an American-made movie included an African language and feels that Black Panther is “resonating” because people can relate to the characters. And besides that, it sets Black Panther apart from other films in the Marvel Cinematic Universe.