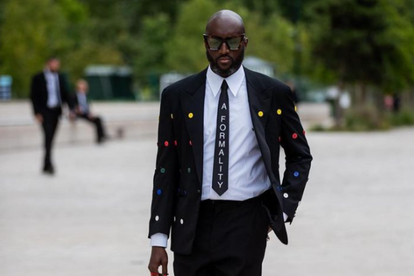 The Grammys are being called out for defining the late Virgil Abloh as a ‘Hip Hop Fashion Designer’. Image via Instagram @virgilabloh

The Grammys are being called out for defining the late Virgil Abloh as a ‘Hip Hop Fashion Designer’. Image via Instagram @virgilabloh

The Grammys 2022 came under scrutiny after labelling the late designer Virgil Abloh, known for his label Off-White designer brand, as a “Hip-Hop Fashion Designer” during a memorial tribute. This according to E! News.

During this year’s In Memoriam tribute, a segment dedicated to the artists that lost their lives the past year, the Louis Vuitton artistic director and Off-White CEO was labelled a “Hip-Hop Fashion Designer”, and Twitter is not having it.

“Virgil Abloh was the damn artistic director of Louis Vuitton menswear and founded a full-on fashion house in Milan,” the Watching the Throne podcast posted. “I get them trying to tie him to music in some way to ‘explain’ the inclusion to clueless people. But respect is more important than catering to a clueless person.”

Abloh who died of cancer in 2021 was known for rubbing shoulders and working with hip hop artists to the likes of Kanye, but fans and critics of the label given to him by the Recording Academy do not agree that it should define his career. The designer and visionary was 41 years old when he died.

Apart from his work at Louis Vuitton and the luxury Italian brand Off-White, Abloh also worked with Fendi and Nike. He also created the Grammy-nominated packaging for Kanye’s 2012 Watch the Throne album, as per E! News.

Supporters and critics of the “Hip Hop Fashion Designer” label took to Twitter to relay their dismay.

“The micro aggressive racism we see in fashion and entertainment today still baffles me,” another stated.

Twitter posts continued: “cos the thing is, we know someone probably queried that and thought is it necessary then somebody with sign off said yes. they could’ve said ‘iconic’ or something or just ‘fashion designer’. somebody purposefully kept it in. none of these moments are accidents.”

E! News reached out to the Recording Academy for comment.