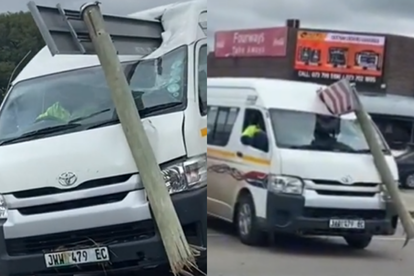 This taxi has stunned Mzansi. Images via TikTok: @swazzington

This taxi has stunned Mzansi. Images via TikTok: @swazzington

Taxi drivers have built themselves a reputation for being fearless when it comes to road rules and the safety of their passengers. One driver may have taken things too far after deciding to continue his trips despite there being a large road sign wedged directly above the windscreen window.

The video has made its way all over social media users and judging by people’s reactions, not much can surprise South Africans at this point.

South Africans are truly something else and one local taxi driver has proved that statement to be quite true.

A video of the taxi taking a trip on a busy street with a huge road sign stuck on top of its windscreen window was shared on TikTok by a user with the handle @swazzington and has been trending ever since. It was captioned:

According to Cape Town ETC, the taxi was on its way to Queenstown, Eastern Cape, and was going to let nothing stop it from reaching its destination – evidently not even a huge and dangerous sign poking out of the windscreen.

Many locals headed to the comment section to either laugh out loud or share just how much they loathe taxi drivers and their insistence on rule-breaking and living dangerously on the edge.

Some, however, were not even surprised and mentioned this too. Here are some of their comments:

“If you remove it. The taxi is gonna bleed to death”

The incident comes shortly after a man was recorded catching a ride at the back of an Engen truck using a trolley.