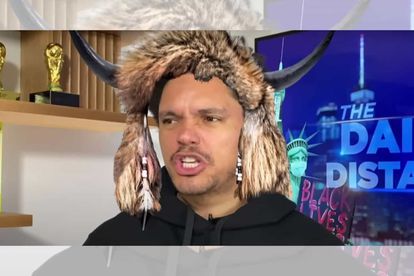 On The Daily Social Distancing Show, SA’s Trevor Noah shared his views of the Capitol Riot that took place in Washington DC, United States, on 6 January 2021.

Trevor Noah on the Capitol Riot

It is said that Trevor has been away over the Christmas break, but on Tuesday 19 January he returned to his post — and his comeback monologue packed a pretty serious punch.

Yes, according to Mashable, Trevor recapped the Capitol Riot which left five dead (including a police officer) and many more under FBI investigation, before unpacking the fallout and calling “bullshit” on Fox News, Republicans, and social media companies alike.

“Did you see this mob?” Trevor asks. “Because they came in with the goal to overthrow the government, but once they got in there they were like ‘yeah, you know what let’s vote on something…actually guys let’s adjourn for the day. We will come back tomorrow… we couldn’t get anything done’.”

Trevor goes on to say that he cannot understand why these pro-Trump supporters wanted to punish former vice-president Mike Pence.

“No one has been more loyal to Trump than Mike Pence…”

Finding the culprits on the gram

Since the riots took place, it seems the FBI is rounding up some of the violent protesters. These people were seemingly found via social media. Trevor finds this very questionable.

“Has it really gotten this bad? That social media has poisoned us to the point where we are going to livestream our treason?”

Of Trump’s legacy, Trevor says that “you have to admit a few things about this guy”.

Namely, that he’s “completely dropped the bar for presidential behaviour. I mean, in 10 years, a president could just pee in the middle of a press conference, and everyone will just be like, ‘huh, I guess he just had to go’.’”

But Trump has been consistent, Noah added. “The victimhood and racial resentment that came down that escalator in 2015 – those are the same that ended up at the Capitol on 6 January,” he said, a consistency which has “exposed how bullshit so many other people are”.

Before getting back to work, it was reported that Trevor shelled out a whopping $27.5 million (R423 million) for a contemporary mansion in Bel Air, the LA Times confirmed. It appears the stand-up comedian has a thing for architectural showplaces.

Trevor, who will be hosting the 2021 Grammy Awards in March, bought the modern mansion — which sits atop a hill — from Mark Rios, an LA architect who built the 11 000-square-foot home for himself.

Inspired by Japanese aesthetics, Rios told Architectural Digest previously that he went through 50 plans before settling on the final design and employed dark timbers based on a room he saw in Kyoto and extra-thick walls to protect against the noise of the city below.