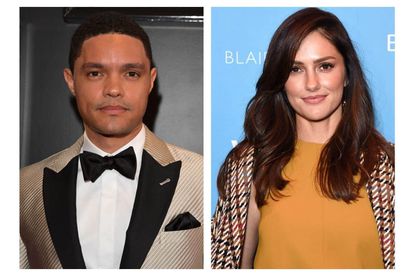 It is said that the couple has gotten serious after dating for the last couple of months and are looking to move in together soon. At the moment they are reportedly living in Trevor’s Manhattan apartment, where he’s been shooting episodes of The Daily Social Distancing Show – the socially distant version of his hit show on Comedy Central. Now, recent reports suggest this might change soon.

According to All4Women, the latest reports suggest that the lovers could be set to move in together in the coming weeks, with sources admitting that things have developed extremely well in their budding romance. In fact, the couple even made headlines on The Wendy Williams Show hosted by Wendy Williams.

She revealed on a recent episode of her show that Trevor and Minka were seen house hunting in Los Angeles. Wendy spilled the tea as she said, “If you know anything about Noah … you’ll know that he likes a solid a relationship, he’s not the dating type, he says that, he’s been saying that for years … these two are looking for a house together in LA. They are not married, they’re not engaged though”.

Trevor and Minka were spotted out together for the first time in September 2020. The pair were seen getting out of an SUV and walking into Trevor’s apartment in New York City. In a photo, the actress, 40, had several pieces of luggage as Trevor, 36, stood beside her and held the leash of a small dog, which appeared to be Minka’s pup, Freddy.

According to Entertainment Tonight, Minka was previously linked to Grey’s Anatomy’s Jesse Williams. The two dated amid Williams’ contentious split from his ex-wife. Williams and Minka called it quits in 2018 after more than a year of dating. Trevor, on his end, dated model Jordyn Taylor from 2015 to 2018.