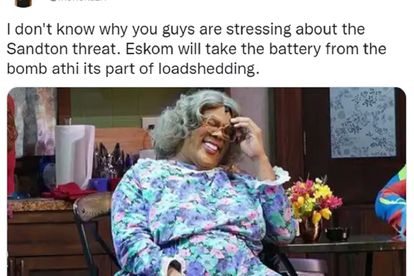 South Africans are laughing off news of a potential terrorist attack in Sandton this weekend.
Image via Twitter

South Africans are laughing off news of a potential terrorist attack in Sandton this weekend.
Image via Twitter

South Africans are known for making a joke about anything and everything – and not even the threat of terrorist attacks in Sandton is enough to scare them!

On Wednesday 26, the country was warned by the US Embassy of a possible attack in the affluent area over the weekend.

On Saturday, the Joburg Pride Parade will take place through the streets of Sandton.

According to News24, a terrorist group linked to ISIS was potentially targeting the gay pride parade and a theater show by Jewish comedian Nik Rabinowitz in the Sandton area.

News24 claimed that sources identified “seven individuals believed to be part of a cell aligned to the Islamic State (ISIS)”. It added that “the method of the potential attack, be it using a vehicle, firearms or explosives, could not be independently verified”.

On Wednesday, the US Embassy raised the alarm that they had received information that “terrorists may be planning to conduct an attack targeting large gatherings of people at an unspecified location in the greater Sandton area of Johannesburg”

No further information was given.

Later, the office of the presidency officially “noted” the terrorist attack alert. It said in a tweet: “It is the responsibility of the South African security forces to ensure that all people within our country feel safe.

“Law enforcement agencies continue to monitor for any threats to our citizens, our nation, and our sovereignty.

“Threats are assessed continuously and are acted upon to ensure the safety of all. Should the need arise, the South African government will be the first to inform the public about any imminent threat”

TWEEPS REACT TO WARNING WITH MEMES

Meanwhile, South Africans on social media were taking the news of a terrorist attack with a pinch of salt, and several memes…

@saso_mahloane: “Knowing South Africans, those terrorists will be highjacked and robbed before they even reach Sandton”

@Kennyw75: “But do they have to do it just after Diwali? We had enough fireworks for the next 6 months”

@BeauVoyageSA: “It’s a bomb party in Sandton..you attend you are sent to a Jesus location”

@De_Hustler65: “Knowing South Africans tomorrow there will be a terrorist challenge on TikTok”

In memes posted on Twitter, tweeps poked fun at the targets of the terrorist attacks – slay queens, residents of Sandton, and the LGBTQ community, who unfortunately all caught stray bullets.