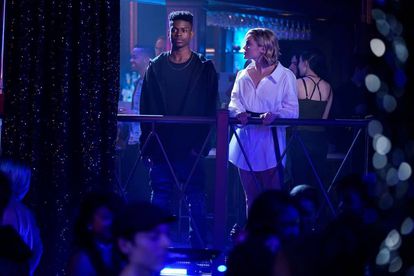 Cloak & Dagger may have flown under the radar a bit with the glut of superhero-inspired series currently on our televisions.

However with season 2 available on Showmax right now you have no excuse to catch one of the better comic book adaptions out right now.

Cloak & Dagger at face value could be dismissed as another attempt to cash in on Marvel’s intellectual property with the teen market.

The show has undeniably been a hit with the teen market, both the leads were nominated for Teen Choice Awards. There’s more to Cloak & Dagger than a catchy title and beautiful people.

The show has an 87% critics rating on Rotten Tomatoes, and the sentiment among TV critics is shared by the comic book community.

Comicbook.com hailed Cloak & Dagger as “the most important superhero series on the air”.

In addition, Den of Geek declared it as “the best superhero show on television”.

The first season of Cloak & Dagger introduced us to Tandy Bowen (Olivia Holt) and Tyrone Johnson (Aubrey Johnson), the unlikely eponymous duo who have to figure out their emerging powers and complicated pasts.

Tandy emits light daggers, and Bowen can engulf people in darkness. With their pasts and powers mysteriously connected, the two need to find a way to work together.

Comicbook.com compares Holt’s portrayal to those of Gal Gadot, and Brie Larson as Wonder Woman and Captain Marvel, respectively. Shadow & Act have labelled Johnson as deserving of being “Hollywood’s next big thing”.

If you haven’t watched season 1 of Cloak & Dagger, go watch it now. We can say this without spoiling anything: season 2 will look to give both characters room to develop as the dynamics shift in their world.

Season 1 of Cloak & Dagger allowed the characters to grow and change before us with more focus on the heroes than on how super they were.

The second season picks up the pace as our heroes begin to embrace their powers and their responsibilities. In addition, show favourite Detective Brigid O’ Reilly returns playing an even more significant role.

Lahana actually made it into the IMDb Top 500 for her role ahead of the Teen Choice nominated leads. You can binge season one and two of Cloak & Dagger on Showmax right now.