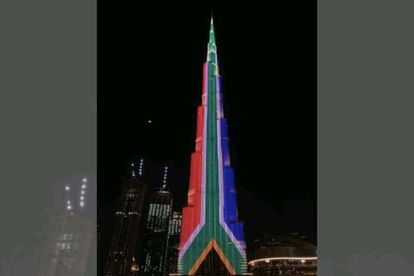 The United Arab Emirates (UAE) has shown its support of Freedom Day and what it stands for by draping the South African flag over its tallest skyscraper — the Burj Khalifa — in Dubai on Monday 27 April.

The Department of International Relations and Cooperation (Dirco), on Monday, posted an image of the UAE’s gesture saying:

“The United Arab Emirates is commemorating Freedom Day 2020, 27.04.2020. The South African flag has been draped on the Burj Khalifa in Dubai. This is a great testament to the unity between SA and the UAE. Thank you.”

The Burj Khalifa, known as the Burj Dubai prior to its inauguration in 2010, is a skyscraper in Dubai. With a total height of 829.8 metres and a roof height of 828 metres, the Burj Khalifa has been the tallest structure and building in the world since 2009.

The gesture comes on Freedom Day — a day which holds great significance for many South Africans.

Freedom Day is an annual celebration of South Africa’s first non-racial democratic elections of 1994 which essentially boils down to our freedom after apartheid. It marks the end to years of colonialism and segregation. On the first commemoration of the holiday — 26 years ago — former president Nelson Mandela addressed Parliament to instil unity.

The United States also showed support for Freedom Day by placing a wrap in the famous Times Square in New York.

“In celebration of Freedom Day 2020, this amazing wrap is displayed in all its glory in Times Square, New York. Thank you to the government and people of the USA for this great demonstration of strong bilateral ties between our two countries,” said Dirco in a tweet.

South Africa’s flag recently illuminated the Matterhorn — a mountain in the Swiss Alps — but it wasn’t for Freedom Day. It was simply to show solidarity.

As previously reported by The South African, light artist Gerry Hofstetter has illuminated the mountainside in Zermatt daily with flags since 24 March, in solidarity with other countries that have been affected by the pandemic.

Zermatt’s social media pages also said that the mountain is ultimately “a sign of solidarity”.

When SA’s flag was projected on 24 April, it said:

Due to the pandemic, South Africa has had a different but united Freedom Day.