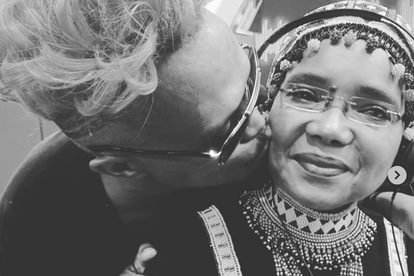 “My heart is full […] I drove straight to the studio just to give mama her flowers”.

Somizi explained that he “jumped out of bed when I heard Anele on [the] radio, speaking to mama”, adding that he drove straight to the studio to give her flowers.

Radio 947 shared a short video of Somizi handing the flowers to Noxolo and her reaction when she saw him was truly heartwarming. They captioned the post:

“Just when we thought the surprises were done Somzi left his warm luxurious bed to grace Anele And The Club as we celebrate umam Noxolo Grootboom and her reaction says it”.

Our very own @HulisaniRavele also couldn’t hold back her tears while sharing the how umam #NoxoloGrootboom has impacted many lives is South Africa.#AneleAndTheClub #NoxoloGrootboomOn947 pic.twitter.com/FsBHfusuoV

This follows after Grootboom read the Xhosa news bulletin for the last time this week.

The veteran broadcaster announced her retirement, and Cyril Ramaphosa postponed his “family meeting” on Wednesday 30 March 2021 by 30 minutes for the nation to tune into her last bulletin.

In addition to sharing a beautiful set of black-and-white photos to mark the occasion, Somizi also thanked Anele for “allowing [him] to crush”. Somizi’s series of photos can be viewed here.

Somizi recently made headlines when he said on Instagram he promised his best friend, Vusimuzi Nongxa (known as Vusi Nova) a “bestication” every two weeks. At the time, the best-friend-duo went to the Kruger National Park.

“We promised each other that 2021 we are doing vacations every 2 weeks… So far so good… Bestiecation.”

Earlier this month, Nova also opened about their friendship, explaining that they had known each other for sixteen years and that he trusts Somizi with his life. “I met him even before I got into the music industry”.

Nova added that Somizi was “real” and supportive, and described his best friend as “one of those genuine people who were like if you have a dream, I don’t care how big it is, work towards it”.