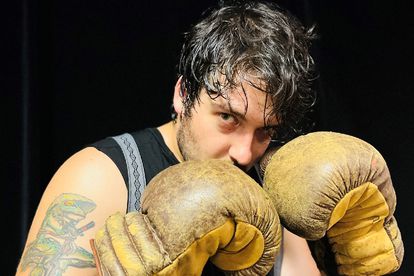 Following its successful debut at this year’s KKNK, ‘Shadow Boxing’ comes to the Baxter Masambe theatre for a limited season. Image Supplied

Following its successful debut at this year’s KKNK, ‘Shadow Boxing’ comes to the Baxter Masambe theatre for a limited season. Image Supplied

Hot off its debut at the 2022 Klein Karoo National Arts Festival (KKNK), the powerful one-hander, Shadow Boxing, comes to the Baxter Masambe theatre, pairing the award-winning director Mdu Kweyama and emerging talent, Daniel Newton from 4 to 21 May at 19:00 nightly with matinee performances on Wednesdays and Saturdays.

Described by Die Burger as “intense, emotionally loaded, relevant and stinging”, Shadow Boxing stars promising young UCT Drama School graduate, Daniel Newton, directed by Mdu Kweyama (Reza de Wet’s Missing; The Goat, or Who is Sylvia?). It is a coming of age story, one of dealing with the demons of the past and discovering one’s identity.

Flynn (played by Newton) is a young boxer, the son of a professional boxer whose career never really took off. Unlike his father, Flynn is determined to become a successful, professional boxer. In doing so, he has to fight off his inherited perceptions of masculinity as he discovers his own identity. He thrusts himself into a gruelling training regime to avoid his internal struggle.

ABOUT THE ‘SHADOW BOXING’ CREW

Mdu Kweyama – currently the artistic director of the unique developmental Baxter Zabalaza Theatre Festival – was awarded the Naledi Award for Best Actor in a Lead Role and Best Original Choreography for Karoo Moose in 2008. His directing accolades at The Baxter include Most Honest Man, Reza De Wet’s Missing, Woza Albert and Edward Albee’s The Goat, or Who is Sylvia? His direction of the Newton’s budding talent is the perfect fit.

Daniel Newton is a promising actor and musician who, in 2021, completed his BA Hons in Drama and Acting at the University of Cape Town. While he started acting for film in 2016, Shadow Boxing is his first professional performance. Media24’s review of Shadow Boxing and Newton’s performance is therefore apt, “Shadow Boxing tackles universal and relevant themes. … Newton is a talented young actor and certainly one to look out for in the future.”

Shadow Boxing previews on 4 and 5 May, opens on 6 May and runs to 21 May 2022 at the Baxter Masambe theatre at 19:00 nightly with matinee performances on Wednesdays and Saturdays at 12:30. Ticket prices range from R50 for group bookings to R120 and are available through Webtickets online or at any Pick n Pay store.