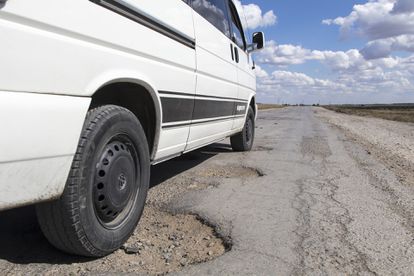 Many are opposing the DTIC’s new import levies on tyres that will likely increase the price of tyres in South Africa.
Image via Pixabay

Many are opposing the DTIC’s new import levies on tyres that will likely increase the price of tyres in South Africa.
Image via Pixabay

For many South Africans, potholes come with the territory when driving on national roads.

But whilst the damage it may cause to your vehicle may be annoying and downright unnecessary, there is something you can do about it.

If you like in main areas like Cape Town, Johannesburg, and Durban, take heed of the following information regarding pothole damage.

YOU CAN CLAIM FOR VEHICLE DAMAGES FROM POTHOLES

Whilst many road users pay for vehicle damages incurred by potholes out of their own pocket, road safety group Arrive Alive claims this does not have to be the case.

As the South African National Roads Agency (Sanral) and local municipalities are responsible for the upkeep of roads, their responsibilities are to keep roads safe and user friendly

With this in mind, road users have a right to claim damages from authorities – this needs to be proved that it was due to negligence on the latter’s part. According to Arrive Alive, road users need to “prove that the damage was caused by a specific pothole, at a specific place, and to a specific vehicle”.

It’s important to note that if you do claim from authorities, you may not claim from your vehicle insurer, as this would amount to insurance fraud.

Arrive Alive states that damages that occur on national roads such as the N1, N2, N12, and others, can be claimed directly from Sanral.

However, roads located in local municipalities need to be dealt with accordingly.

The City of Johannesburg claims that vehicle damage – for example, a burst tire resulting from hitting a pothole – can be claimed if it is linked to road infrastructure that is maintained in the province.

Road users are required to submit documentation like identification, an affidavit of the incident commissioned by police, photographic proof of the pothole and damage incurred, details of the vehicle, and the original purchase invoice of the damaged tires amongst other things.

If more than two tyres were affected, then a towing invoice will also be required.

To submit a claim, road users are required to fill out a form from the Johannesburg Road Agency website and email it along with documentation to claims@jra.org.za

The process to claim for pothole damages in Cape Town is not so straightforward.

According to Deputy Mayor of Cape Town Ian Neilson, city road engineers would have to investigate if there was in fact a pothole in the specified location and if any complaints were made about it.

He told Cape Talk in an interview: “If we were not aware that there was a problem if no one had reported that pothole, then, therefore, there would not be negligence on the part of the City”.

According to the City of Cape Town, they aim to repair potholes within 72 hours after being reported.

To submit a claim, road users are required to visit the Civic Centre at 12 Hertzog Boulevard, Cape Town. Additionally, potholes can be reported via the Transport Information Centre (TIC) on 0800 65 64 63.

For Durban road users, claims relating to potholes require necessary paperwork and documentation, including proof and the location of the pothole.

Submission forms can be found on the 6th floor of the Florence Mkhize Building located on 251 Anton Lembede Street, Durban.