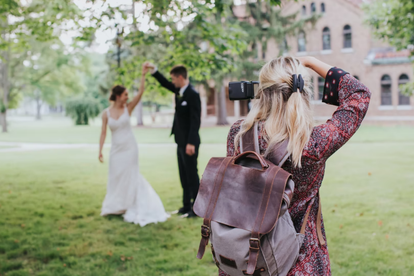 One wedding photographer has shared the signs of a doomed marriage. Image via Unsplash

One wedding photographer has shared the signs of a doomed marriage. Image via Unsplash

Wedding photographers go through a lot and they also see a lot. Years of being behind the camera mean that they see a whole lot more at weddings than anyone else does. Apparently, this has helped a wedding photographer determine the tell-tale signs that a marriage probably won’t last.

A marriage photographer has left many people very interested and surprised. This after she headed to her TikTok page to reveal all the things that she has learned from taking photos at weddings.

According to Shayla Herrington from Arkansas, there are three very obvious tell-tale signs that a marriage just isn’t going to make it. Herrington reveals that a seasoned colleague shared the three warning signs with her and she couldn’t agree more.

“One time I was shooting under this wedding photographer, and they told me they can always tell if a couple will last or not, based on three things.”

The first of the three signs is if the bride or groom takes more than three family photos without being bothered by their partner’s absence.

“This one kinda makes sense to me, just because you might get a few with your mum and dad, but to kick them out of more than three photos just seems a little suspicious,” explained Herrington.

The second sign is when the bridesmaid or groomsmen don’t really want to talk about the bride or groom. Herrington claims that this is a sign that they probably don’t like the person.

The final sign according to Herrington, is when the bride and groom spend more time with friends than with each other.

What do the netizens think?

While many agreed with the signs, others thought it was very nonsensical.

“Married 30 years, hardly saw him at the wedding. We are confident in each other. No need to cling!” said one woman while another wrote:

“The last one is hard because you’re supposed to also be a good host. I spent my whole wedding running around making sure everyone was having fun.”