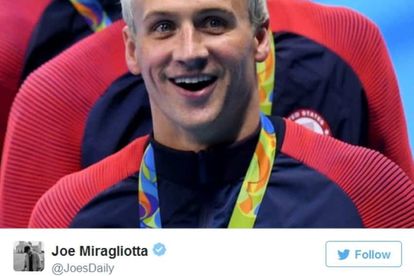 US swimmer, Ryan Lochte probably generated the best memes and Tweets from the Olympic Games.

After an incident, where he lied about being held at gunpoint in Rio, social media let him have it.

He and three of his teammates supposedly lied about being robbed at gunpoint when they actually vandalized a bathroom at a gas station after a night out partying. A few days later, Lochte was reportedly already safe and sound at home in the US when his teammates were still detained for questioning in order to clear up some of the inconsistencies of what happened that night.

During that time, Lochte and his teammates became the subject of dozens of memes and funny Tweets on the internet.

Ryan Lochte to his boys back in Rio! pic.twitter.com/HPPjLsvS4E

When Ryan Lochte escapes Brazil but the rest of the swim team is stranded with seized passports pic.twitter.com/diI00r9nNW

How it really went down at the gas station… #LochteGate pic.twitter.com/f7RUtoVT2J

prosecutor: do you swear to tell the whole truth, and nothing but the truth, so help you god

lochte: jea–[looks at his lawyer] I mean jes

Ryan and his PR team trying to clean up this mess. #lochtegate pic.twitter.com/Tn7eqWKKJW

me imagining what lochte and the gals *really* got into in rio pic.twitter.com/Jfn8HTIP0D

Man. Ryan Lochte finna get extradited for lying to his mom.

Will the real Swim Shady please stand up? #LochteGate pic.twitter.com/AgWF5carRQ

Hey @MichaelPhelps, how many more times do you think @RyanLochte will change his story? #LochteGate pic.twitter.com/Uay6nsrM4a

This Ryan Lochte story is just a few missing details away from being an episode of Law & Order: SVU.

I would rather watch Ryan Lochte being interrogated by Brazilian police than like 90% of Olympic sports.

Turns out Ryan Lochte wasn't even supposed to be at the Olympics and told his parent's he was staying over at Dan's house to do homework.

criminal mastermind Ryan Lochte returns to his American hideout and counts the profits from his latest heist pic.twitter.com/f2sjcKksLi