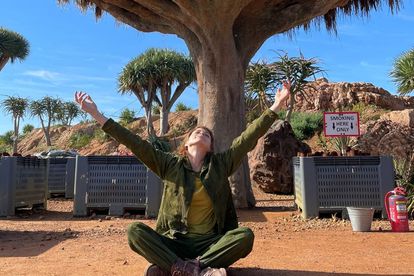 ‘Raised by Wolves’ has been awarded a Gold seal of sustainability. Image via Twitter @RaisedWolvesMAX

‘Raised by Wolves’ has been awarded a Gold seal of sustainability. Image via Twitter @RaisedWolvesMAX

Season two of Raised by Wolves, starring South African actress Kim Engelbrecht, has received a 92% rating on Rotton Tomatoes. Besides receiving global praise for its exceptional landscape and incredible storyline, the science-fiction series is also being praised for its sustainable approach to filmmaking. Raised by Wolves has received a Gold Environmental Media Association seal for Sustainability.

‘RAISED BY WOLVES’ AND SUSTAINABLE FILMMAKING

The second season of Raised by Wolves directed by Ridley Scott was filmed in Cape Town, South Africa. Kim Engelbrecht praised the Mother City saying: “Cape Town does have some element of being otherworldly, so it 100% lends itself to this genre.”

HBO Max, Scott Free (lead by Ridley Scott) and local production company Film Afrika made production choices for Raised by Wolves that would contribute towards a more positive future.

CONTRIBUTING TO SUSTAINABILITY IN SOUTH AFRICA

During season one of Raised by Wolves, the production team funded the GreenSet training programme for eco stewards and green production assistants and the creation of the GreenSet carbon calculator.

A post shared by Raised by Wolves on HBO Max (@raisedwolvesmax)

ALSO READ: ‘Raised By Wolves’: Season two of sci-fi drama series has a lot of bite!

Season two of the series avoided more than 850 000 plastic bottles, decreased paper usage by more than 80%, served more than 15 000 meat-free meals, used 100% biodegradable and recyclable catering packaging and recycled 100% of the set polystyrene.

Raised By Wolves also donated all the set extra set food and 2 500 plants to community upliftment organisations and schools.

During the filming of season two, the production found that there was no option in Cape Town for the recycling and upcycling of polyurethane. After the problem was presented to Hilton Cowie of Envirolite, a company that manufactures building blocks using recycled polystyrene, they designed a machine to recycle polyurethane into building blocks.

“Composting, green waste, ecobricking – we now implement this stuff at home. A lot of our team have taken it from the office and into homes, which is exactly where we need to be,” said wardrobe buyer Gizelle Baumgart.