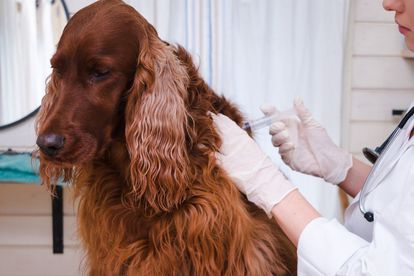 Human rabies cases are on the rise and it is not something to turn a cold shoulder to. Rabies has a 100% fatality rate if not attended to properly and with haste… listening now? Good!

Peertech reports that between 24,000 to 60,000 people die every year from rabies… the scary fact is that more than 95% of these fatalities occur in Africa and Asia.

South Africa has confirmed 17 human rabies cases as of 23 November, according to The Institute for Communicable Diseases. This is more than 100% increase from the mere seven cases reported in 2020.

While 17 cases might not seem like a number to be worried about… it is not something to take lightly either.

World Health Organization (WHO) explains that once clinical symptoms appear, rabies is virtually 100% fatal.With 99% of human rabies cases coming from domestic dogs… people with pooches need to be extra vigilant!

WHAT YOU NEED TO KNOW TO KEEP YOURSELF AND OTHERS SAFE

There is a rabies vaccine that you and your animals can get – the human vaccine is however only given when someone is bitten or to those working in environments where they are more likely to contract the disease. So get your animals vaccinated!

Teaching children animal safety is key! Children need to know not to touch animals without permission, and to also handle them with care as not to provoke defensive biting.

While the only way to truly tell if an animal has rabies is to do a blood test, there are a few signs one could be extra aware of… especially in animals they know.

SIGNS OF AN ANIMAL WITH RABIES

Identifying an animal with rabies is not always easy. It is advised that any bit is taken seriously and medical attention is given. Rather safe than sorry!