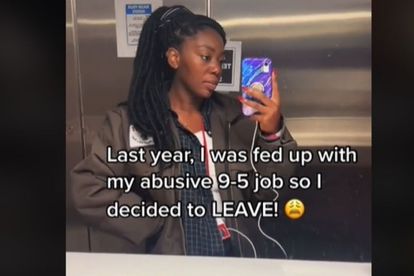 TikTok has seen a lot of weird and wonderful trends, and one of the latest is nothing short of entertaining!

The hashtag #QuitMyJob has gone viral and it’s all about people who film themselves resigning from their place of work.

And no they haven’t won the lottery, they’ve just had enough of their “toxic work environments”.

It all started after Shana Blackwell, a Walmart employee filmed herself quitting her job – via the store’s intercom system!

“Attention all Walmart shoppers, associates and managers,” the woman begins before launching into a long rant where she names and shames her superiors for their alleged “racist, sexist and toxic behaviour”.

The clip – which has been viewed almost 10 million times – ended with Shana defiantly saying: “F** the managers, f** this company, f*** this position … I f***ing quit.”

And here is the video of me quitting my toxic, sexist, racist workplace. ##walmartchallenge ##fyp ##viral ##walmart ##walmarthaul ##walmartfindspart1

The video went completely viral and inspired many others to publicly walk out of their jobs too.

‘THIS IS ME ABOUT TO QUIT MY CORPORATE JOB‘

From corporate to fast food workers, a number of TikTok users are deciding that enough is enough.

“This is me about to quit my corporate job. I’m shaking and you can probably hear my heartbeat,” says one woman who resigns from her job over the phone.

It’s like an elephant took its foot off my chest, but I’m also sad. Onward & upward ???? #quittingcorporate #quittingmyjob #HelloWinter #9to5problems

♬ Dog Days Are Over – Florence & The Machine

Another blames the “stress and anxiety” for their exit.

“No notice, just decided that day that I had had enough. “It was just giving me a lot of stress and anxiety, and it just wasn’t a great job…so if you need a sign, this is your sign to quit that toxic a*** job”.

A third texted their boss the the words to an explicit song including the lyrics: “I’m going to quit my job and get f***** up”.

Needless to say, his boss doesn’t try to convince him to stay!