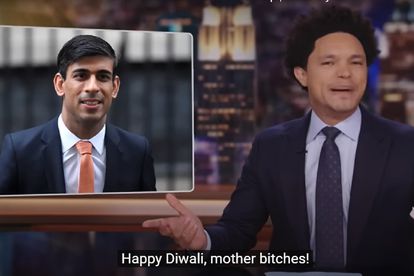 Whilst Rishi Sunak has made history by becoming England’s first Prime Minister of colour, not everyone is happy with the transformative step – and Trevor Noah is calling them out!

The host of The Daily Show publicly called out racist critics of the statesman, who took office this week.

Following Rishi Sunak’s appointment as Prime Minister, many critics called him out as the “wrong choice” – solely based on his race.

On Tuesday’s episode of The Daily Show, Trevor Noah played a clip of a man who expressed his concerns. The man had called in to radio station LBC News to express his fears.

The racist caller said: “Could you imagine becoming the Prime Minister of Pakistan or Saudia Arabia? No! These things matter. I’m sorry you don’t like it. We’re talking about England…85% of English people are white! And they want to see a Prime Minister who reflects them!”

Responding to the man, Trevor Noah sarcastically quipped: “This is a good point. Can you imagine white English people trying to rule countries where no one looks like them!”

He added: “It’s funny how racists say colonisation was fine…until they feel like they’re being colonised. And all of a sudden something needs to be done!

Of Rishi Sunak, Trevor added: “The guy is British! This could be a good thing for you people.

“After 400 years you’ll finally get to legitimately blame a brown person for your country’s problems! You’re living your dreams!

He continued: “There’s a part of me that feels a little bad for England’s racists. Because, remember they voted for Brexit, specifically to keep Britain white. And that vote started a seven-year chain of dominoes that has led directly to an Indian prime minister”.

In a Between Scenes segment, Trevor Noah got serious about the hypocrisy of the situation surrounding criticism of Rishi Sunak.

He said: “What are you afraid of? Why are you so afraid of it? And I think it’s because the quiet part that a lot of people don’t realise they’re saying is: ‘We don’t want these people who were previously oppressed to get into power. Because then they may do to us, what we did to them.

“Which ironically is not true. Unless people are being delusional, people are not turning on anybody

He continued: “What do you think is going to happen? Why are you afraid of power shifting to another gender and another race….ask yourself the question. I think deep down inside, you’ll find yourself admitting to something you wouldn’t admit otherwise out loud”.

ALSO READ: Rishi Sunak and wife’s net worth double that of King Charles

WHAT DO BRITS SAY?

Whilst many praised Rishi Sunak on his new appointment, others were concerned about how his personal standing would affect his professional one.

And apart from race, many critics found fault with the fact that the former investment banker has a whopping net worth of over $800 million

@RichardBurgon: “Rishi Sunak’s wealth is so vast that it would take someone on the average UK salary over TWENTY-FOUR THOUSAND YEARS to earn that much. Remember that when he’s talking about ‘difficult decisions’. He doesn’t mean difficult for him. He means difficult for you”

@TheManc36: “Unelected PM – a multi-millionaire who says he understands the struggles of the many. A man who probably pays more each year to heat his swimming pools than the common man earns”

@Sankul333: “Rishi Sunak is a billionaire upper caste born in a life of extreme privilege. As Prime Minister he is going to send refugees to detention camps in Rwanda, and give tax cuts to billionaires to make the poor poorer & his rich buddies richer. This is a victory for hate, not diversity”

@NeilMackay: “So there we are: Rishi Sunak, a multi-millionaire, who boasted about moving public money from ‘deprived urban areas’ to the wealthiest parts of Britain is our new Prime Minister – without mandate or election. The poor will be crucified and the rich enriched as our democracy rots”