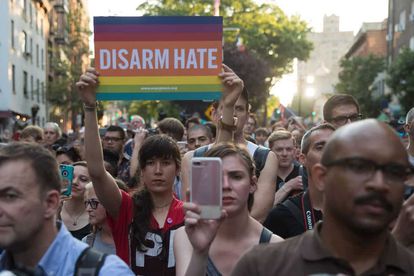 This years celebration, however, is different. It marks the 50th anniversary of the Stonewall Uprising. The riots took place when a group of people decided they had enough of the NYPD’s homophobic policies.

In essence, the Stonewall Uprisings started the gay liberation movement, as well as the fight for human rights that continues to this day, five decades later.

The 1969 events were a turning point for the LGBTQ rights, which was practically non-existent fifty years ago. It is the reason we celebrate Pride Month in June.

The Stonewall Inn Riots led to the first Pride Parade being celebrated in 1970.

What happened at the Stonewall Inn?

Back in 1969, the conflict between the New York Police Department and protesters had been brewing for days. On 28 June 1969, the NYPD raided the Stonewall Inn, a gay bar in Greenwich Village.

Patrons were arrested for no reason, and the officers and demanded that those who were dressed in clothes considered to be “unlawfully gender-inappropriate” submit proof of identification.

While this was nothing new – New York authorities frequently raided Stonewall Inn – 28 June 1969 was different. The community had had enough and decided to do something about it.

Faced without a barricade of about 100 police vehicles, Stonewall Inn patrons began hurling coins and other objects at the police force. The crowds burned down the officers’ barricades and refused to leave.

Drag queens and trans women of colour held the line and they formed a chorus line outside Stonewall Inn. The remained there for days, finally finding the power to stand up against injustice.

As news of police brutality made headlines in the ensuing days, the events at Stonewall Inn inspired gay, lesbian and trans groups to organise and demand justice and respect.

The laws criminalising same-sex activity gradually disappeared from state penal codes following the Stonewall Inn riots. However, it wasn’t until 2003 that the Supreme Court declared the laws as unconstitutional in 2003.

In addition, the Stonewall Inn opened up debate around the topics of gay, lesbian and trans, and addressed many aspects of inequality in American society.

The movement also called for social change on a global scale, which eliminated many of the factors that caused inequality, such as heterosexism, misogyny, racism, and poverty.

Unfortunately, the battle isn’t over. The fight of rights for all members under the LGBTQ flag still rages today, more than fifty years later. In many parts of the world, same-sex relationships are still criminalised.

As for the Stonewall Inn bar, it still stands to this day. The iconic establishment is situated on 53 Christopher Street in Greenwich Village, New York.